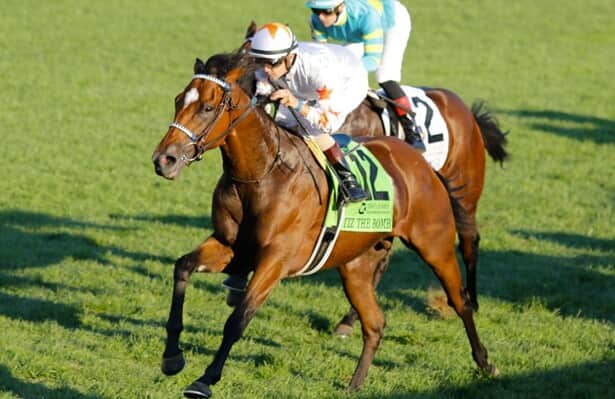 Following a controversial running of the Breeders’ Cup Juvenile Turf on Nov. 5 at Del Mar, Tiz the Bomb returns Saturday on the dirt in the Grade 2, $400,000 Kentucky Jockey Club (G2) at Churchill Downs.

Tiz the Bomb crossed the wire second in the Juvenile Turf, but was the winner for betting purposes, as first-place finisher Modern Games ran for purse money after being erroneously scratched at the gate and then re-inserted into race.

Trained by Kenny McPeek, Tiz the Bomb was installed as the 3-1 morning-line favorite in the Kentucky Jockey Club. The son of Hit It a Bomb broke his maiden on dirt at Ellis Park in July and has twice won on grass, including the Bourbon (G2) at Keeneland prior to his Breeders' Cup effort.

Tiz The Bomb will be ridden by Brian Hernandez Jr.

He will face a deep field under the Twin Spires that includes Howling Time running for trainer Dale Romans. The Not This Time colt, who is 2-for-2 including a win in the Street Sense at Churchill Downs most recently, was set as the 7-2 co-second choice. He will be ridden by Joe Talamo.

Red Knobs is a 15-1 longshot on the morning line. He will be ridden by Ricardo Santana Jr.

The Kentucky Jockey Club is schedule to go to post at 5:56 p.m. EST. It will distribute 2022 Kentucky Derby points to the top four finishers in 10-4-2-1 payouts.

Here is a look at the complete field for the 2021 Kentucky Jockey Club with trainers, jockeys and morning line odds in parentheses.

TimeFormUS' pace projections predict a fast pace for the race, with Classic Causeway, running for trainer Brian Lynch, getting out front. Tiz the Bomb is predicted to be in the middle of the pack.

Laurie Ross took a look at the pedigree of the contenders in the race.