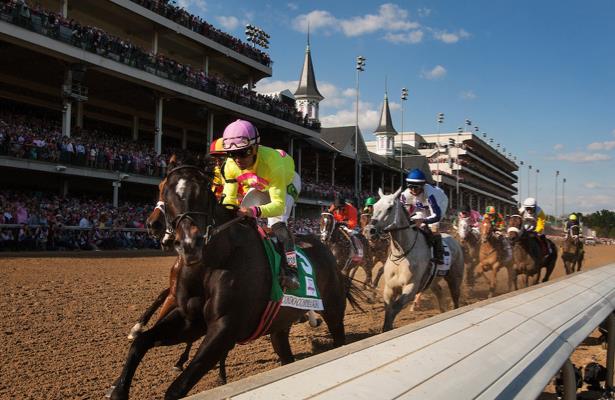 Live horse racing in Kentucky should not be expected for “months,” the state's governor says. During his daily briefing on the COVID-19 pandemic on Friday, Kentucky Gov. Andy Beshear answered questions about the immediate future of horse racing in the state. Beshear started his answer about the future of horse racing by quoting a report from the state’s horse racing commission. “Kentucky Horse Racing Commission told the tracks it was unable to suggest a timeline for the reopening of live racing in the State,” said Beshear. He expounded on his original answer, giving a generalized timeline. “It’s going to take as long to defeat this virus as it takes. We’re talking about some term of months, not some term of years,” said Beshear. The Governor provides daily public briefings regarding the coronavirus pandemic, sharing information regarding the state’s response and providing vital statistics in regards to the virus. Beshear noted that he would remain vigilant in his efforts to keep groups of people from gathering. “The moment we start trying to say that we believe it’s ‘x’ days away is the day is the moment people start relaxing on the social distancing. We see the spike and ultimately, we lose more people because of it,” Beshear said.

The second part of the question asked if Kentucky would again consider racing in front of empty grandstands. “As long as we are seeing an escalation (of reported COVID-19 cases), you would still have groups of people that would come together to make that happen. While there might be a point, hopefully, when we see cases going down, that’s something we can consider. Right now, we shouldn’t be getting people together for any reason whatsoever,” Beshear said. Turfway Park conducted the final days of its race meet with no spectators before it was forced to close last month, losing three race dates. Keeneland was forced to cancel the entirety of its April race meet. Churchill Downs was scheduled to begin live racing on Apr. 25. Last month, it was announced that the Kentucky Derby, scheduled for Saturday, May 2, would be postponed until Sept. 5. The Churchill Downs website racing calendar currently shows Thursday, May 7 as the first day of live racing at the track. That date appears to be optimistic at best.