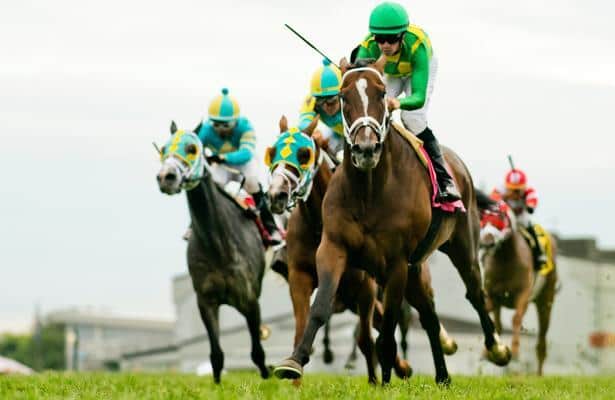 Byron King, a freelance turf writer, publicist and handicapper based in Louisville, is setting Kentucky Downs’ morning line odds and analyzing the stakes races as part of the Runhappy Meet’s publicity team. The longtime Daily Racing Form writer has covered and handicapped Kentucky Downs for two decades. These selections were made before the scratch deadline, with a look at early changes here.

Race 6: Juvenile Turf Sprint
SOUPER DORMY (#5, 9-2) was a gritty first-out winner at Ellis Park in a turf sprint, defeating favorite and next-out winning Shippingport by a nose, and he has since shown improved speed in his morning workouts on the Churchill Downs main track for trainer Mark Casse.
CHIMNEY ROCK (#9, 7-2) looms the likely favorite after winning a maiden race at Saratoga in fast time, doing so despite a wide trip. He lost two earlier starts but had excuses, with one race coming in the slop and another being a two-turf race at 1 1/16 miles.
ALCOOLS (#10, 6-1) and SCOCCIATORE (#11, 6-1) are recent private acquisitions, both coming to Kentucky Downs by way of Canada. ALCOOLS was an upset winner at first asking on the synthetic surface at Woodbine, while SCOCCIATORE scored on turf in his third race after shaking loose early. ALCOOLS is related to a pair of stakes winners, Grade 1 dirt winner Hog Creek Hustle and minor turf stakes winner Majestic Dunhill.
Selections: 5-9-10-11
Race 7: Kentucky Downs Turf Sprint (G3)
This Win and You’re In” prep for $1 million Breeders’ Cup Turf Sprint (G1) drew three of the best turf sprinters in the country. Listed in order of this horseplayer’s preference, they are LEINSTER (#8, 3-1), winner of the Grade 3 Troy at Saratoga; IMPRIMIS (#3, 4-1), who took the Grade 2 Shakertown at Keeneland in the spring; and STORMY LIBERAL (#9, 9-2), Breeders’ Cup Turf Sprint winner the past two years.
LEINSTER, still a maiden into April of this year, is much-improved since adding blinkers, rattling off three straight victories, each one faster than the last.
IMPRIMIS, meanwhile, returns to the U.S. after a respectable try when sixth in the Group 1 King’s Stand during the prestigious Royal Ascot meeting in Britain. He is 7-for-10 overall on turf.
STORMY LIBERAL, champion turf horse of 2018, rates behind this duo, not having won in four starts this year since edging World of Trouble in the 2018 Breeders’ Cup Turf Sprint at Churchill Downs. He also won the 2017 Turf Sprint in California.
Others to use on the bottom of exotic wagers in this race include WET YOUR WHISTLE (#1, 8-1) and WHITE FLAG (#6, 8-1).
Selections: 8-3-9-1
Race 8: Ladies Turf (G3)
MITCHELL ROAD (#7, 5-2) deserves a pass for going unplaced when in the Grade 1 Diana. She grew rank when closely placed near a rabbit and weakened late as a result. Excuse that race and her form stands out. A half-sister to Country House, elevated to first by disqualification in this year’s Kentucky Derby, she won four in a row from December through May.
SIMPLY BREATHLESS (#2, 5-1) came up empty going 1 3/16 miles last out in the Modesty, a distance likely beyond her preferred trip. A mile is her game, and she gets that distance here. Note that she twice won stakes between a mile and a mile and a sixteenth earlier this year.
KALLIO (#3, 10-1) has found her niche as a late runner in these mile races, which typically unfold with more pace than longer events. In peak form, she won the Kentucky Downs Ladies Turf Preview at Ellis Park last month.
STORM THE HILL (#5, 3-1) obviously fits based on her California form, but to date she has not run as effectively in the Bluegrass as she has out west. She was fourth in this race last year, and ran some below-par races at Churchill Downs and Keeneland.
Selections: 7-2-3-5
Race 9: Ladies Sprint (G3)
OLEKSANDRA (#3, 3-1) will be tough to beat as the likely favorite, having won three of her last four starts, capped by the Smart N Fancy Stakes at Saratoga. A strong-finishing turf sprinter, she seems made for the 6 ½-furlong trip.
MORTICIA (#7, 4-1), on the other hand, has been kept primarily in races going 5 or 5 ½ furlongs. So there appears to be a chance for regression going a bit longer. She is a hard knocker, though, and winner of more than $700,000. She met the top choice in the Smart N Fancy, finishing fourth, beaten two lengths.
With starts mostly in claiming races and allowance races, TINY TINA (#9, 10-1) is a tricky mare to evaluate from a class perspective in this stake. But she has been winning, and if able to make the transition to routes to a sprint, she could prove dangerous at a price.
RUBY NOTION (#10, 6-1) was in career-best form at this time last year, scoring in this race after taking the Caress at Saratoga. She is winless in four starts this year, seeming off form, though she did show improvement when third in the Smart N Fancy.
Selections: 3-7-9-10
Race 10: Kentucky Turf Cup (G3)
ZULU ALPHA (#9, 9-2) was a half-length behind ARKLOW (#10, 5-2) when they last met in the Bowling Green at Saratoga, a race in which ARKLOW was third and ZULU ALPHA fifth. Another meeting, coming last fall in the Sycamore at Keeneland, resulted in ZULU ALPHA beating ARKLOW by a couple of lengths.
Given that there does not be a lot separating the two, making ZULU ALPHA the value-based choice, though lessening the enthusiasm is the fact he was unplaced in one prior start on the Kentucky Downs turf, coming long ago. In contrast, ARKLOW won this race last year in his only local start. ARKLOW is also a consistently fast horse.
PILLAR MOUNTAIN (#7, 10-1) has developed rapidly in recent months when stretched out to marathon distances. He was a respectable sixth in the Grade 1 Sword Dancer after winning consecutive allowance races in New York.
FACTOR THIS (#6, 12-1) might slip by bettors due to lacking experience over this 1 ½-mile trip. He has won three in a row for trainer Brad Cox, topped by Ellis Park's Kentucky Downs Preview Kentucky Turf Cup. If able to enjoy an easy pace, he may outrun expectations.
Selections: 9-10-7-6
Kentucky Downs Ladies Turf Kentucky Downs Ladies Sprint Kentucky Downs Turf Sprint Stakes Kentucky Downs Juvenile Turf Sprint Kentucky Turf Cup Kentucky Downs Ladies Turf (2019) Kentucky Downs Ladies Sprint (2019) Kentucky Downs Turf Sprint Stakes (2019) Kentucky Turf Cup (2019) Kentucky Downs Juvenile Turf Sprint (2019)