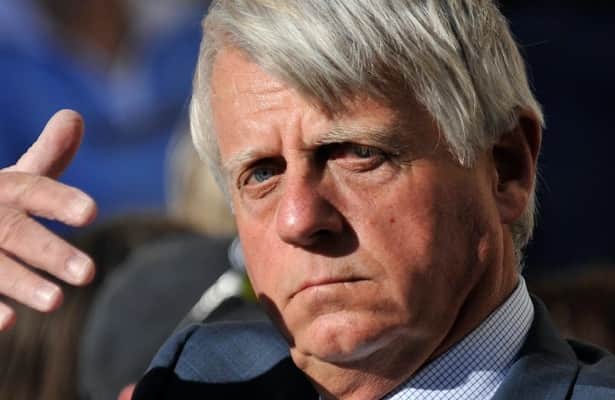 John T. Ward Jr., who trained Monarchos to win the 2001 Kentucky Derby, died Saturday night in Kentucky. He was 75.

Marc Guilfoil, who succeeded Ward as executive director of the Kentucky Horse Racing Commission, said he got the news in a text message early Sunday.

“He was a good guy,” said Guilfoil, who added he knew Ward for 30 years and worked with him for about a decade. “What’s the saying? He forgot more about horse racing than most people will ever know? That was John.”

“John Ward Jr. personified the phrase ‘Kentucky hard-boot,’” said Mike Anderson, president of Churchill Downs Racetrack. “He was a third-generation horseman who worked tirelessly throughout his career. ... Our hearts and prayers will be with Ward’s family and friends throughout Derby week as they grieve during this difficult time.”

Working with his wife, Donna, Ward also trained Beautiful Pleasure, who won the Breeders’ Cup Distaff on her way to becoming the 1999 Eclipse Award winner as the best older female.

Ward enjoyed a long working relationship with owner John Oxley. Before Beautiful Pleasure and Monarchos, they campaigned Gal In a Ruckus, who won the 1995 Kentucky Oaks.

Asked in a New York Racing Association biography about his first winner, Ward said, “I’m not positive, but it may have been Plain and Simple. I know it was at Churchill Downs and that it was during the mid ’70s.”

A native of Lexington, Ky., Ward was a born horseman, preceded in the business by his parents and grandparents. His paternal grandfather John Sherrill Ward was a revered trainer as was his uncle Sherrill Ward, who made the National Museum of Racing and Hall of Fame for his work with three-time Horse of the Year Forego.

According to the NYRA biography, it was not long after graduating from the University of Kentucky when Ward took over his family’s horse farm from his ailing father 50 years ago.

John and Donna Ward ran a stable in his name in addition to their Sugar Grove Farm near Keeneland. They were honored in 2002 with the Ambassadors of Racing Award from Kentucky Thoroughbred Media.