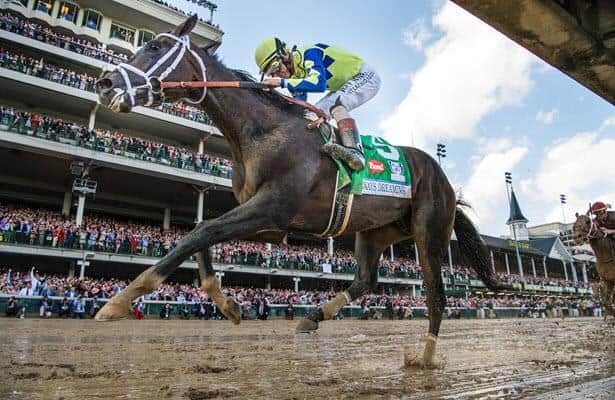 Always Dreaming, winner of this year’s Kentucky Derby (G1) and Florida Derby (G1), will return to training in November and be pointed for a 4-year-old racing campaign in 2018, it was announced Monday.

The 3-year-old colt from the first crop of Bodemeister was found to have stomach ulcers after the Travers Stakes, and was recently cleared of the ulcers by veterinarians after treatment and a month of being turned out at WinStar Farm in Versailles, Ky.

“When Always Dreaming came to the farm, we had a complete physical conducted by Dr. Bramlage and his team at Rood & Riddle. He checked out extremely well and was in very good shape, except for his stomach,” said WinStar President & CEO Elliott Walden. “He had a pretty bad case of ulcers. Dr. Steve Reed of Rood & Riddle said it was one of the worst cases of ulcers he has seen. The interesting thing is (trainer) Todd (Pletcher) said his appetite was always stellar, and he has been treated with Gastrogard all year. Todd is extremely vigilant on taking care of his horses, and it was a complete shock to all involved.

"The great news is we’ve been able to clear up the ulcers and he’s doing fantastic right now. It also explains a lot about his regression in form, and we are extremely excited about his racing potential in 2018. The sky is the limit.”

Always Dreaming will have a follow-up scope of his stomach in the coming weeks, and he’ll continue to be turned out through the end of the month. Plans call for him to resume light training at WinStar’s training facility on Nov. 1, before being sent down to Palm Beach Downs on Dec. 1 to rejoin trainer Todd Pletcher’s Florida operation.

“I’m glad we found something that we could fix,” said Pletcher. “Up until the Preakness, I had never seen Always Dreaming get beat at anything, whether it be a workout or race. He did not act like a typical ulcer horse, but the pictures we got from the stomach scope were about as bad as I have seen. Gastrogard is a good treatment plan and works for the majority of my horses, but, every now and then, you run into a horse that gets ulcers through the medication. I can’t wait to get him back.”

“We are excited to race Always Dreaming next year with the original partnership of myself, Anthony Bonomo, West Point and Siena, along with now WinStar, SF Bloodstock, and the China Horse Club,” said Vinnie Viola, co-owner of Always Dreaming. “Obviously, the last few races were not the real Always Dreaming. He is a special horse, and we look forward to watching him regain the form that was so dominant in the Florida Derby and Kentucky Derby.”

An earner of $2,344,700 to date, Always Dreaming is one of just two multiple Grade 1-winning 3-year-old colts in North America in 2017. He captured the $1 million Florida Derby by a decisive five lengths in his stakes debut in April, running 1 1/8 miles in 1:47.47 – marking the fastest running of the prestigious Grade 1 race for 3-year-olds since Alydar in 1978. That performance made Always Dreaming the favorite for the $2 million Kentucky Derby (G1) a month later, and the dark bay colt delivered to wear the roses with a dominant 2 ¾-length triumph – the largest margin of victory in the last half dozen years in the Derby.

Bred in Kentucky by Santa Rosa Partners, Always Dreaming is out of the Grade 3-winning, Grade 1-placed and multiple Grade 1-producing In Excess (Ire) mare Above Perfection, and is a half-brother to Saratoga G1-winning juvenile Hot Dixie Chick.

Preakness weather: 93 degrees and climbing at Pimlico
Baltimore Not that partying students who are finis...