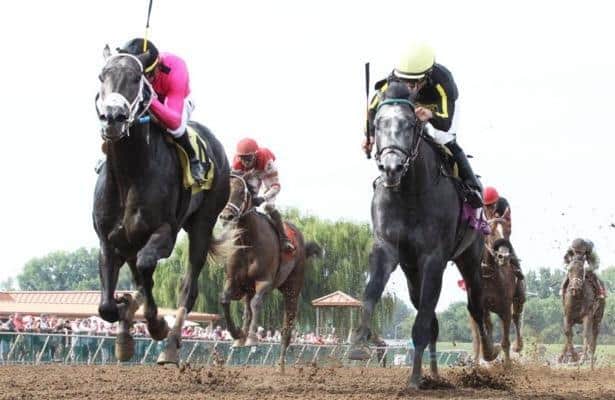 Gray Magician, the UAE Derby runner-up who finished last May 4 in the Kentucky Derby, won a stretch duel Sunday vs. Knicks Go to claim the $100,000 Ellis Park Derby.

Knicks Go, who won Keeneland’s Grade 1 Claiborne Breeders’ Futurity last fall at 2, broke to the lead Sunday from the outside No. 10 post. He set fractions of :24.17 and :47.03 while Gray Magician stalked in second.

Gray Magician pulled up to the outside of Knicks Go entering the stretch. Those two raced side-by-side several lengths clear of the field, with Gray Magician prevailing at the wire by a neck.

Night Ops came up to finish third ahead of fourth-place Harvey Wallbanger, a Grade 2 winner.

“I watched his replays, and he always finishes fast,” said Lanerie after riding Gray Magician for the first time. “Today I thought we’d be sitting third, maybe fourth. But he always broke really good in his races, and again today. He’s a good gate horse, he leaves really fast in the first three jumps, and then he falls right back in your hands.

“To be honest, I almost underestimated the horse on the lead. Coming to the quarter pole, I’m taking a peek back looking for closers and almost sat a little too long and gave him a little bit of a run in front of me. It took all I had to get by him. But my horse, he just prevailed and was the best horse today. Peter Miller and his crew had him ready. I’m glad I didn’t mess it up.”

Gray Magician needed four tries before finally breaking his maiden last November at Del Mar. From there, he earned a Kentucky Derby bid by running second March 30 at Meydan Racecourse in the UAE Derby.

In the Kentucky Derby, Gray Magician never advanced into the top half of the field and was finished by the quarter pole. He came home 19th of 19.