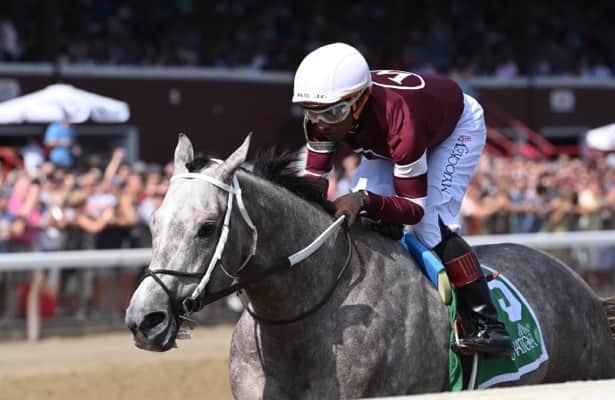 Echo Again and Tapit Shoes, who are among the top 20 choices in Kentucky Derby 2023 futures betting, collectively were entered to race Saturday at Fair Grounds. Not just for Derby qualifying points in the Grade 3, $200,000 Lecomte Stakes but also in an allowance race that will punch above its normal weight.

They were among 22 futures options who were drawn into seven races Saturday at five different tracks.

Related: Tapit's Conquest is out of Lecomte, in allowance.

Those futures reach beyond the everyday books in Nevada this week. Bettors across the country will have six of these horses available individually in pool 3 of the Kentucky Derby Future Wager. Churchill Downs is offering those win and exacta pari-mutuels from Friday at noon to Sunday at 6 p.m. EST.

Ringside (7-2 morning line), 100-1 in the Circa futures for the Derby, makes a much anticipated first start in this $32,000 race covering a mile and 40 yards. Owned by partners who include Coolmore and Georg von Opel, he of the Opel car family, the Curlin colt out of the Medaglia d’Oro mare Dashing Debby cost $1.3 million at the Keeneland yearling sale in September 2021. Ringside has been a regular in morning works for the past four months at Belmont Park and at Palm Beach Downs. Antonio Gallardo will ride him for trainer Todd Pletcher from post 4.

Run Cory Run (5-1), 250-1 at Circa, is one of the two starters who is making a class drop for this race. Trainer Saffie Joseph Jr. adds blinkers after this Accelerate colt finished a distant fifth on debut with Irad Ortiz Jr. riding Dec. 16 in a $70,000 maiden mile at Gulfstream Park. This time Run Cory Run gets jockey Marcos Meneses.

Three weeks ago Coffeewithchris and Prince of Jericho finished first and second going seven furlongs in the Heft Stakes. They will be rematched against six other 3-year-olds covering the same course and distance in another black-type stakes that also is worth $100,000.

Coffeewithchris (2-1), 350-1 at Circa, had not crossed the wire first until he won the Heft, although he broke his maiden last May when stewards at Pimlico promoted him over the disqualified winner. Bred by National Thoroughbred Racing Association CEO Tom Rooney, the Ride On Curlin colt is co-owned and trained by John Salzman. With a record of 8: 2-1-2, Coffeewithchris will be ridden by Jaime Rodríguez.

Prince of Jericho (7-5), 250-1 at Circa and 175-1 at Caesars, had won at the maiden and allowance levels at Laurel and was pushing for three straight wins, each as the favorite, when he was a 3-5 upset victim stretching to seven furlongs in the Heft. Trainer Brittany Russell is adding Lasix this time for the $85,000 Munnings colt who is owned by Michael Dubb and Morris Bailey.

Heldish (9-2), 300-1 at Circa, was sold for $160,000 since he finished third to a pair of next-out winners in the James F. Lewis III on Nov. 12 at Laurel. The Great Notion colt who won his first race and went 5: 1-3-1 as a 2-year-old was moved from Russell to trainer Mike Maker, who is adding Lasix and assigning the ride to Jevian Toledo.

Crupi (5-2), 45-1 at Circa, was highly regarded before he hit the track last summer. The Curlin colt owned by Mike Repole and Vinnie Viola was a $275,000 yearling who was bet heavily in his first three starts. Gate issues contributed to third-place finishes in all those races. He improved to second last out Nov. 20 in a maiden test at Aqueduct. Crupi drops into this $80,000 race and cuts back to a one-turn mile with Irad Ortiz Jr. riding again.

Yorkshire Prince (8-1), 300-1 at Circa, looks to improve on a second-place finish going seven furlongs in the Big A slop on Dec. 3. In two starts the $170,000 Cairo Prince colt has not been shorter than 10-1. Trainer Tom Morley has called on Eric Cancel as he stretches Yorkshire Prince in hopes his mid-pack style will be better suited to this distance.

This Run’s for You (4-1), 350-1 at Circa and 175-1 at Caesars, was 11 lengths better than 10 other starters in his July debut going six furlongs at Gulfstream Park. He since was left a combined 17 3/4 lengths up the same track in his last two starts, both in restricted stakes. Trainer Kathleen O’Connell is adding Lasix and hoping a class drop and a cutback from seven to six furlongs will help this Stonehedge homebred by Khozan. Héctor Díaz will be the third jockey in four races for This Run’s for You.

Whether it is the permitting of Lasix or the thought this would be an easier assignment, this $80,000 race for non-winners of two might upstage the Lecomte. Two Tapit colts from Brad Cox’s barn will attract plenty of the betting attention both in this race and in the Derby futures.

Tapit’s Conquest (7-2), 135-1 at Circa, 75-1 at Caesars and 99-1 on the morning line in the KDFW, was cross-entered for both this race, with Lasix, and the Lecomte, without it. Cox decided Saturday morning to go in this race after the exit of injured morning-line favorite Banishing, according to a Twitter post from radio host Steve Byk. Tapit’s Conquest broke his maiden last out as a 9-5 favorite in his second start, going 1 1/16 miles Oct. 1 in a $120,000 race at Churchill Downs. He was sold as a yearling for $350,000 to Robert LaPenta, Bob and Kristine Edwards and Sol Kumin. Cox will have his first-call jockey Florent Géroux on Tapit’s Conquest.

Tapit Shoes (4-1), 50-1 at Caesars and 45-1 at Circa, was given morning-line odds of 50-1 for the pari-mutuel KDFW. A $300,000 yearling purchase owned by Spendthrift Farm and Steve Landers, he was a seven-length winner at 8-5 odds, breaking his maiden over the same course and distance that he will be asked to cover Saturday. Cox is keeping Corey Lanerie aboard.

Determinedly (7-2), 110-1 at Caesars and 100-1 at Circa, has been in the money in all three of his starts since he was moved off the turf by trainer Mark Casse. Extending to 1 1/16 miles last out Dec. 26 at Fair Grounds, he withered to a third-place finish in the Gun Runner, still earning him three Derby qualifying points. Getting his first dose of Lasix, the Cairo Prince colt will have Luis Sáez in the irons for the third time in a row.

Invulnerable (9-2), 300-1 at Circa, was a debut winner who stretched to a mile, set the pace and finished second Dec. 17 in a $100,000 allowance race at Oaklawn. The $130,000 Practical Joke colt trained by Joe Sharp will be teamed with James Graham, his third different rider in as many starts.

Silver Heist (8-1), 150-1 at Circa and 135-1 at Caesars, made his debut Dec. 26 with a one-length victory going six furlongs at Fair Grounds. Brian Hernandez Jr., who came into the week with three wins, a second and a third in his last 10 starts, got the call from trainer Steve Asmussen to ride this Mandy Pope homebred by Tapit.

The 2-1 morning-line favorite Banishing was declared out of the race Saturday morning. “Just scraped himself up a little,” trainer Brendan Walsh told Horse Racing Nation in describing an overnight stall accident. “Nothing serious, but we can’t run.” The Ghostzapper colt who won his debut by 8 1/2 lengths at Fair Grounds was carrying futures odds of 55-1 at Circa, 45-1 at Caesars and 50-1 in the KDFW.

With Rachel Alexandra’s half-brother Itzos being scratched in order to race in the Leonatus on Saturday night at Turfway Park, the other six horses drawn into this race worth 20-8-6-4-2 Derby qualifying points also are in the Derby futures.

The weather will provide an important additional wrinkle for Saturday’s card in New Orleans. The National Weather Service forecast a 70 percent chance of showers with the possibility of a thunderstorm, a high near 62 degrees and an east wind of 15-20 mph blowing in the faces of horses in the homestretch.

This race may be regarded as a prep for the John Battaglia Memorial, a Derby points race March 4 going 1 1/16 miles over the same synthetic track hosting Saturday’s $125,000, one-mile feature.

Funtastic Again (5-2), 350-1 at Circa, surrounded his ninth-place finish in the Breeders’ Futurity (G1) at Keeneland with maiden and allowance victories, one at Saratoga last August and the other in a Turfway mile last month. Gerardo Corrales will ride the Funtastic colt for trainer Wesley Ward.

Raise Cain (3-1), 275-1 at Circa and 150-1 at Caesars, was second at 23-1 last month in the Gun Runner at Fair Grounds. The maiden winner will race for the first time on an all-weather course, reunited with jockey Luan Machado. Ben Colebrook trains the $180,000 Violence colt who is owned by Andrew and Rania Warren.

Hayes Strike (9-2), 250-1 at Circa, went 7: 1-1-1 as a 2-year-old, slugging it out in stakes company in four of his last five starts for trainer Kenny McPeek. Coming off a distant fourth in the Gun Runner, this cutback to a mile will be the first Tapeta start for William and Donna Shively’s homebred by Connect.

The Leonatus Stakes had sneaky importance last year. Rich Strike began his 3-year-old campaign finishing third in this race, 3 1/2 months before his 80-1 surprise in the Kentucky Derby.

Of the 226 individuals listed in the three futures markets, these were the 28 who were entered for races in the next three days: