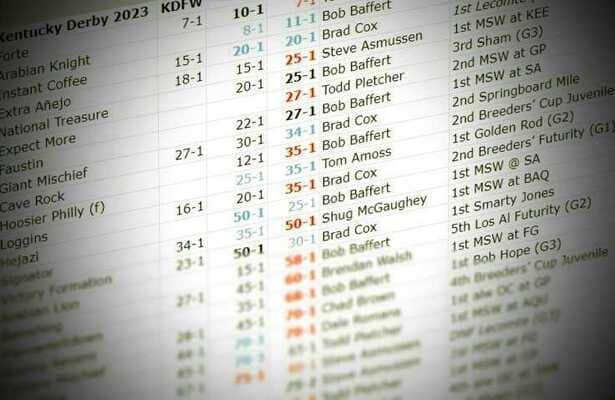 During a weekend full of movement in the national and Nevada futures markets, Forte burnished his place as the favorite to win Kentucky Derby 2023.

Biding his time until his next start March 4 in the Fountain of Youth (G2) at Gulfstream Park, the Breeders’ Cup Juvenile winner closed Sunday as the top individual choice in pool 3 of pari-mutuel Kentucky Derby Future Wager conducted nationwide by Churchill Downs. Forte’s 7-1 KDFW odds, actually plus 786, virtually matched his fixed-odds price in Las Vegas at Circa Sports, where Forte went from plus 750 to plus 775.

At Caesars Sportsbook, though, Nevada bettors still could get the Todd Pletcher-trained Violence colt at 10-1, second only to Bob Baffert’s debut winner Arabian Knight at 8-1.

Three of the 38 individual horses offered in the KDFW closed with better odds than they had Monday morning in Las Vegas. Two Phil’s, who finished second Saturday at Fair Grounds in the Lecomte (G2), was 91-1. Tapit Shoes, fourth in a high-profile allowance on the Lecomte undercard, was 105-1. Prairie Hawk, an allowance winner this month at Tampa Bay Downs, was 171-1.

Instant Coffee, who made the Lecomte his second victory in a Derby points prep, was cut to 20-1 at both books in Las Vegas and closed at 15-1 in the KDFW. One of 17 futures choices from the Brad Cox stable, the Bolt d’Oro colt had been 70-1 at Circa and 50-1 at Caesars.

Because Hejazi is one of 21 futures horses trained by Baffert, he would have to be transferred to another trainer by Feb. 28 in order to be eligible for Derby qualifying. The deadline in a little more than five weeks was written into the Triple Crown nomination rules and reported Sunday by Daily Racing Form’s David Grening.

Baffert has been fighting that rule and other repercussions from the disputed drug test that the late Medina Spirit failed after he finished first in the 2021 Kentucky Derby. That led not only to a disqualification but Baffert’s two-year suspension by Churchill Downs Inc.

As usual, Circa was the most active shop when it came to moving its odds. It cut the prices for 14 horses, drifted them for 142 others, added five new choices and dropped 20.

Caesars added five names to bring its list to 140. It shortened the odds for 17 horses and made them longer for nine others.

After a net loss of four horses, these were a combined 219 listed Monday morning in the fixed-odds and pari-mutuel futures markets for Kentucky Derby 2023, shown in order of their best prices as shown in bold face: