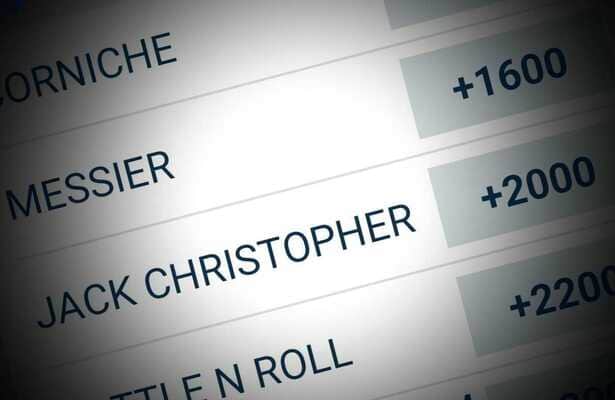 The Las Vegas futures market for the 2022 Kentucky Derby is still bullish on Bob Baffert.

Ban or no ban from Churchill Downs, the Hall of Fame trainer has the top two horses – Corniche and Messier – in betting for the May 7 running of the Derby.

Corniche, the Breeders’ Cup Juvenile winner, held steady Sunday night as the 6-1 favorite in the odds posted round the clock by Caesars Sportsbook at William Hill Nevada. Messier, the winner of this month’s Bob Hope Stakes (G3) at Del Mar, shortened from 20-1 to the 16-1 sole second choice.

RELATED: Track the contenders for the 2022 Kentucky Derby.

Jack Christopher, who reportedly will miss two months after having surgery on his left front cannon bone, held steady as the 20-1 third choice.

Rattle N Roll, the Connect colt trained by Ken McPeek, was cut for the second time since his victory last month in the Breeders’ Futurity (G1) at Keeneland. After opening at 75-1, he went from 30-1 last week to 22-1.

Prices drifted for only three horses, all of whom raced during the weekend. Kaely’s Brother (200-1 from 150-1) crossed second as an odds-on favorite but was promoted by stewards to a stakes victory for trainer Brad Cox at Delta Downs. Maiden winner Daufuskie Island (250-1 from 200-1) was a distant third for Kelly Breen in a stakes at Aqueduct. Sonnyisnotsofunny (275-1 from 175-1), a maiden winner who finished third as the 6-5 favorite in a claiming race at Churchill Downs, was claimed and transferred to Wayne Catalano.

Seven new names appeared, led by Rocket Dawg (125-1), a Cox-trained colt by Classic Empire. At odds of 9-2 he won his debut by 5 1/2 lengths Friday going seven furlongs at Churchill Downs. Owned by Frank Fletcher and the Ten Strike Racing partnership of Clay Sanders and Marshall Gramm, Rocket Dawg was bought as a yearling for $375,000.

Derby betting choices get a little more crowded this holiday weekend, when the first pool of the pari-mutuel Kentucky Derby Future Wager will be run nationally by Churchill Downs. Circa Sports of Las Vegas is expected to open its fixed-odds Derby futures next week.

Caesars at William Hill lists 171 horses in its Derby futures.