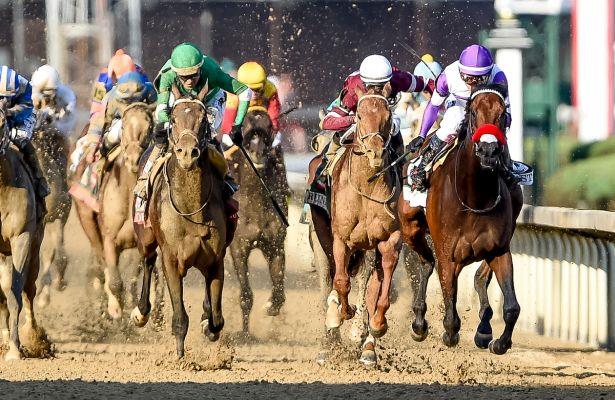 Saturday’s $1,250,000 Grade 2 Pennsylvania Derby features a rematch between the top three in this year’s Kentucky Derby. Nyquist, Exaggerator, and Gun Runner lead a field of twelve three-year-olds in the one and one eighth miles race at Parx. Race picks can be found at Pennsylvania Derby 2016: Odds and Analysis from A New York State of Racing.

Post positions and odds are below as seen on the HRN Stakes Tracker.

Nyquist, the winner of this year’s Kentucky Derby, is looking for his first win since the first Saturday in May. After finishing third in the Preakness and fourth in the Haskell while battling for the lead, trainer Doug O’Neill plans to keep Nyquist off the pace this time around while taking blame for the two losses. Out of ten lifetime starts, the champion two-year-old’s only two defeats came from his last two starts. If Nyquist should win, he may be able to seal up champion three-year-old honors.

Preakness victor Exaggerator looks to rebound from an 11th place finish in the Travers, where he was beaten 33 lengths. After running a valiant second in the Kentucky Derby, Exaggerator turned the tables in a sloppy Preakness only to finish 11th in the Belmont Stakes. After a late decision to target the Haskell, Exaggerator again won on a sloppy track over Nyquist, 4th, and Gun Runner, 5th. The Pennsylvania Derby presents the colt with another chance of redemption.

Exaggerator breezed 5f this am at CD in preparation for PA Derby @parxracing @b_hernandezjr up pic.twitter.com/dl53bT1fKR

Gun Runner has been consistent throughout his nine starts with a record of 5-0-2. He was third in the Kentucky Derby and skipped the rest of the Triple Crown trail to come back for late summer races. He had an easy victory in the Matt Winn before running fifth in the Haskell, but finished third of 13 in a very competitive Travers field. The only two times he has finished out of the money have been on sloppy tracks, and he should be right up there in the top finishers on Saturday.

Too much speed in the Pa Derby if all run. Will Nyquist be too fresh to sit off? Gun Runner could get run of the race.