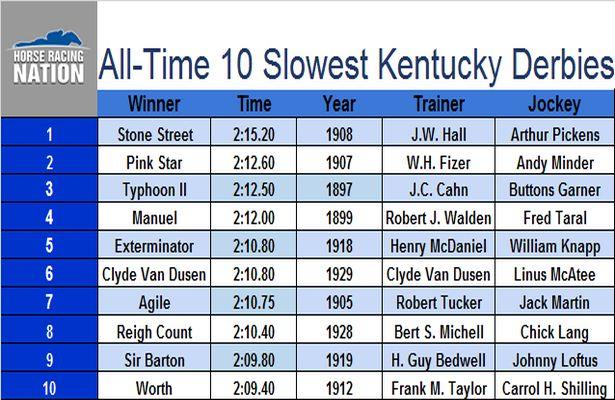 If you take a look at the Kentucky Derby times through the years, it is easy to see that the horses have gotten faster. The first Kentucky Derby was run in 1875 at Churchill Downs at a distance of 1 1/2 miles. In 1896, the distance was shortened to 1 1/4 miles. The times listed here are the 10 slowest editions of the race since the 1 1/4 miles distance was implemented.

2.) Pink Star, 1907, 2:12.60: Another sloppy track and another longshot. Pink Star ran on a Churchill track where the horses were in mud up to their fetlocks. He was retired the following year because of his bad temperament and lackluster races.

3.) Typhoon II, 1897, 2:12.50: Typhoon II was bred in Tennessee and beat the Derby favorite on a muddy track. His performance level fell after his three year old year and he eventually retired to a farm in Lexington as a pensioner. When his owner demanded the trainer to dispose of the horse because the paddock was needed for something else, the trainer gave him to a friend, who used him as a cart horse pulling hay for livestock.

4.) Manuel, 1899, 2:12.00: Manuel was bred in Louisville, Kentucky at Bashford Manor Stable. He missed the rest of his three-year-old year after stepping in a hole on Churchill Downs’ track. He faced only four other horses in the Derby.

5.) Exterminator, 1918, 2:10.80: Willis Sharpe Kilmer bought the gelding Exterminator to work alongside his two-year-old champion colt Sun Briar, who was to run in the Kentucky Derby. Kilmer often referred to Exterminator as "the goat," even though the gelding would run right with Sun Briar in workouts unless held back. To Kilmer's dismay, Sun Briar would not be Derby bound due to ringbone. Churchill Downs president Matt Winn had to convince Kilmer to run Exterminator. Off at 30-1 in the slop, Exterminator proved many people wrong and won by a length. He raced until the age of nine and ran 99 times, earning the nickname "Old Bones.” He lived out his retired life with companion ponies, each one named Peanut. Exterminator lived until he was 30.

6.) Clyde Van Dusen, 1929, 2:10.80: Clyde Van Dusen was the last gelding to win the Kentucky Derby before Funny Cide in 2003. He was a son of Man O'War, but was said to be "a mere pony of a horse with a weedy frame." Because of his appearance, he was named after his small statured trainer. The 1929 Kentucky Derby was run in the pouring rain and Clyde Van Dusen's mud caulks on his shoes helped him through the slop. He won by two lengths and beat the favorite and future horse of the year Blue Larkspur. Clyde Van Dusen was purchased by his trainer after his racing days to become an exercise pony.

7.) Agile, 1905, 2:10.75: Agile only faced two competitors when he won the Kentucky Derby. He also won the Phoenix Stakes in his three year old year, which used to be held at Lexington's Kentucky Association racetrack. Keeneland picked up the race in 1937 and it is still run today. Agile later became a family's carriage horse.

8.) Reigh Count, 1928, 2:10.40: Reigh Count certainly had a great run in both his race career and stud career. He won four races at two, including the Kentucky Jockey Club Stakes, and took the Kentucky Derby at three. He missed the Preakness and Belmont because of an injury, but came back later that year to beat the Preakness winner and receive Horse of the Year honors. He also won the Jockey Club Gold Cup that year against older horses. As a four year old, Reigh Count shipped to England and won the Coronation Cup before finishing second in the Ascot Gold Cup. He stood stud in Paris Kentucky and sired 22 graded stakes winners, including 1940 Triple Crown winner Count Fleet.

9.) Sir Barton, 1919, 2:09.80: With no win as a two-year-old, Sir Barton started his three-year-old year in the Kentucky Derby and was entered as a rabbit. Sir Barton flipped the tables and won the race, then took the Preakness and Belmont, becoming the first Triple Crown winner in America and 1919 Horse of the Year. At age four, Sir Barton took on Exterminator in the Saratoga Handicap and won. After a mostly unsuccessful stud career, Sir Barton served as a work horse for the U.S. Army Remount Service. He was then bought by a Wyoming rancher and lived out the rest of his days on his owner's ranch.