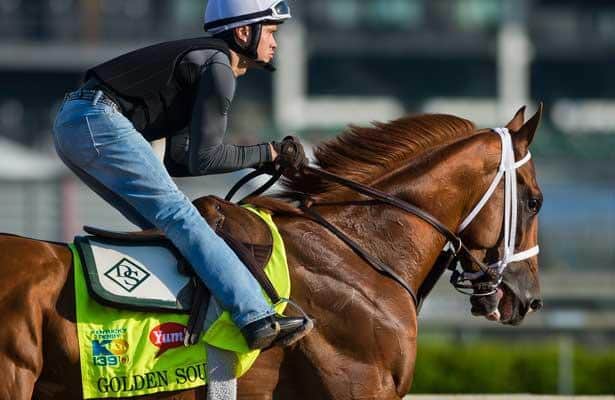 Regular exercise rider Pedro Velez was up for the work, the first for Golden Soul since finishing last of seven in the Grade 1 Haskell Invitational on July 28 at Monmouth Park. Stewart is targeting the Grade 1, $1 million Travers on August 24 for the Perfect Soul colt's next start.

"He worked great," Stewart said. "Actually, he came out of the Haskell great. I can't explain the bad race. Health-wise, he's fine. We've been galloping him steady, giving him his normal routine and he's handled it fine. He worked great today. He had great energy and came home good, so we're pointing toward the Travers."

Since breaking his maiden December 30 at Fair Grounds, Golden Soul is 0-for-6 this year, running second in the Grade 3 LeComte and following his Derby run, was ninth in the Grade 1 Belmont Stakes. In the Haskell, he ran last all the way around and wound up beaten 29 ½ lengths.

"The next day, he was sharp, feeling good. I had to walk him with a lip chain for three days," Stewart said. "He was full of energy when he galloped and [showed] everything you like to see coming out of a race. He ran bad; I really don't know why. Maybe he didn't like the racetrack. It was a disappointing race, but he came out of it good. It happens in racing. The Travers, we think he can be competitive."

Stablemate Perfect Title, last seen running seventh of nine in the Grade 2, $600,00 Jim Dandy at Saratoga on July 27, also had his first work since the race, going five furlongs in 59.39 seconds on the main track.

"We'll think about where we should go with him next," Stewart said. "I don't know about [the Travers] with him yet. We'll have to talk about it."