Kentucky Derby 2022: Pletcher trio is all set after final breezes 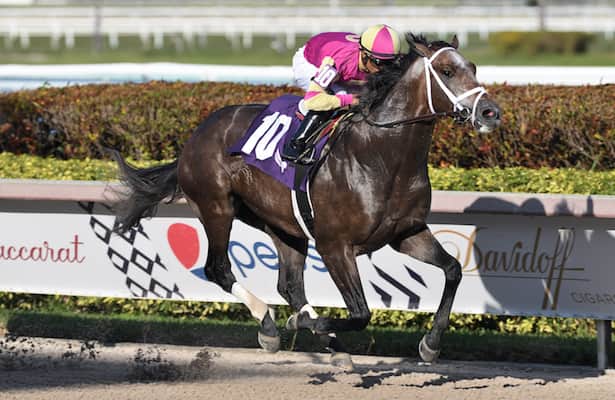 Every trainer with a Kentucky Derby contender wants to get through the last major workout in good order and with everything going according to plan. Hence, Hall of Famer Todd Pletcher was breathing a sigh of relief after nearly having the last part of that equation go awry when the sirens went off signaling a loose horse on the track just as his pair of Florida Derby (G1) runner-up Charge It and Pioneer of Medina commenced their half-mile breeze in company at Churchill Downs on April 30.

After hitting the track at 7:30 a.m. EDT during the special training period reserved for Derby and Kentucky Oaks (G1) contenders, Charge It and Pioneer of Medina had broken off for their work with the former on the inside when the yellow lights began to flash after a horse unseated their rider and came running the wrong way down the backstretch. An incident was avoided when the renegade horse turned down the gap and ran back to the barn area, and Pletcher radioed to his riders that the coast was clear for them to continue as they posted splits of 12.2, 23.6 and 35.8 seconds before finishing in tandem in 47.4 seconds.

Todd Pletcher sent Charge It (inside) and Pioneer of Medina (outside) 4 furlongs inn 47.40 ahead of the #KyDerby pic.twitter.com/yJUSHqXTLR

“Thankfully I had both riders on the radio and I was able to (see) the loose horse out of the side of my eye and see him run off the track,” said Pletcher. “On the radio, I was able to tell Luis (Saez on Charge It) and Carlos (Perez on Pioneer of Medina) that it was safe to continue to go ahead and work and gallop out. Obviously not what you want to hear in the middle of a final Kentucky Derby breeze but no harm, no foul. I thought it was impressive for both. Super big gallops out."

Pletcher also worked Wood Memorial (G2) winner Mo Donegal in company with My Prankster during the special training period with the son of Uncle Mo setting off moments after his barn mates completed their moves. Working on the inside, Mo Donegal covered four furlongs in 48.6 seconds with a gallop out in 1:01.8.

His final work before the #KyDerby, Mo Donegal (inside) worked 4 furlongs in 48.60. pic.twitter.com/vOZJ7UP6z3

“We were looking to do a little less with Mo Donegal,” Pletcher said. “It looks like he's moving well and both works over the track I've been happy with. He’s a horse who doesn't require a whole lot of training and he's coming back in four weeks off the Wood, so we were just looking for a couple maintenance halves to keep him happy.”

With two graded stakes wins and five career starts under his belt, Mo Donegal ranks as one of the more battle-tested members of the expected Kentucky Derby field. The bay colt has also been flattered by the exploits of those he has defeated with Zandon, who was second to him in the Remsen Stakes (G2) last December, stamping himself as one of the buzz horses this week on the strength of both his victory in the Blue Grass Stakes (G1) and visually impressive works since.

“I mean it’s kind of a sign of the times when you look at a horse like Mo Donegal who has had five starts and he’s considered to be one of the more seasoned horses in the race,” Pletcher said. “But that’s sort of what we’re looking at these days. I think what is important with him is not just the five starts, but the experience he’s gotten in those starts. What we saw in the Wood is he was able to take a lot of dirt and sit inside and weave his way through traffic, all things that would be important in any race, but particularly this one.”

Charge It is on the lighter end of the experience spectrum as the Kentucky Derby will mark his fourth career start. The son of Tapit ran extremely green down the lane when finishing second in the April 2 Florida Derby at Gulfstream Park, but Pletcher wasn’t unhappy to see the colt not have everything go his way that day.

“You could argue that had he broken sharply and went to the lead and won wire to wire, that would have been terrific on that day, but would not have given him the experience we need for this coming Saturday,” the two-time Derby-winning trainer said. “He didn’t get away cleanly, he got some dirt, he encountered some traffic, he was green down the lane. Hopefully those are all things he gained experienced from and improves now having had that type of race.”

Pioneer of Medina, third last time out in the Louisiana Derby (G2), still needs a defection to get into the Kentucky Derby field as he is currently 21st on the points list. That help could come as trainer Chad Brown said he is likely to wait for the Preakness Stakes (G1) with Wood Memorial runner-up Early Voting, but no official decision has been made yet.

“I suppose until (Brown) finalizes his decision we don’t know for sure,” Pletcher said. “Could there be a defection, usually, but we’re not rooting against anyone. We’re in a position where the horse has trained well, I think he’s earned his way in if he gets in. If not, we’ll go a different direction. I’d have to think about it (entering as an also-eligible).”