Ky. Derby: Cyberknife, Zozos are among 11 with final works 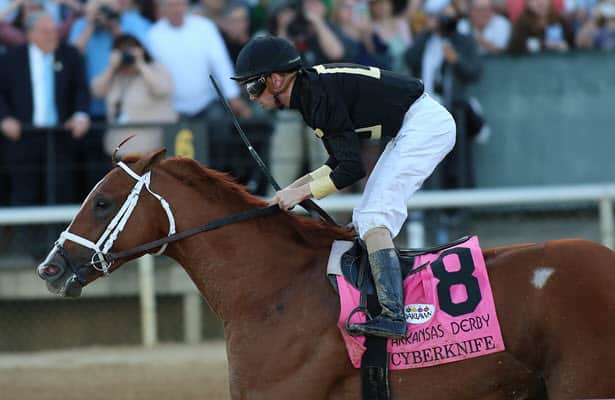 With a packed lineup of Kentucky Derby contenders turning in their final major works in preparation for the first leg of the Triple Crown, trainer Brad Cox opted to beat some of the rush by sending Arkansas Derby (G1) winner Cyberknife and his lightly-raced Zozos stablemate through their last serious paces as soon at the track opened at Churchill Downs on April 30.

Hitting the main surface just after 5:15 a.m. EDT, Cyberknife and Zozos went in company under the lights with the former breaking off about a length behind under jockey Florent Geroux. The duo finished up about on even terms with Cyberknife clocking six furlongs in 1:11.20 and Zozos being credited with a time of 1:11.40 under jockey Flavien Prat.

Brad Cox trained duo, Zozos (inside) and Cyberknife (outside) worked 6 furlongs in 1:11.20 and 1:11.40 respectively, ahead of the #KyDerby. pic.twitter.com/thb4x9RHVQ

“They got a little blow out of it. They got something out of it,” said Cox, who later worked his third Derby contender, Tawny Port, five furlongs in 1:01.60 in company with Shared Sense. “If they’re going to be able to do it (on Derby day), they need to be able to handle what we’re throwing at them in the morning. I think we’re in a good spot.

“They were well in hand this morning. These horses breezed along well and galloped out good but yeah, you want to be able to do it and feel like you have a gear left. I feel like these horses this morning did that.”

Cox confirmed Saturday that Ricardo Santana, Jr. will have the mount on Tawny Port with Manny Franco set to ride Zozos.

Owned by Gold Square, Cyberknife has given Cox fits at times with his lack of focus and antics, including unseating Geroux before his 2 3/4-length win in the Arkansas Derby. The more that is asked of the son of Gun Runner though, the more mature he seems to get and Geroux said he believes there is still plenty more his mount has to offer him in a big spot.

“Honestly, I’ve seen a lot of improvement the last few weeks with him especially,” Geroux said. “It seems like the more he races, the better he gets mentally. The physical ability was always there but I really feel like he has turned the corner mentally. I think he knows he’s good and it’s likes he pumps up his chest. I definitely feel that we haven’t hit the bottom of him yet.”

In Cyberknife, Zozos, and Lexington Stakes (G3) winner Tawny Port, Cox is hitting all ends of the spectrum in terms of where each is at in their development. Where Cyberknife has the proven top-level ability, Zozos only has one prior stakes try – a runner-up effort in the Louisiana Derby (G2) – while Tawny Port will be making his third start in five weeks having run second in the April 2 Jeff Ruby Steaks (G3) before wheeling back to take the April 16 Lexington Stakes (G2) at Keeneland.

“You can win this thing multiple ways and we’re kind of attacking it in three different ways,” said Cox, who was awarded the victory in the 2021 Kentucky Derby with Mandaloun when Medina Spirit was disqualified due to a medication positive. “In regard to Tawny Port, obviously it’s going to be three races in five weeks for him. Zozos is lightly raced, back in six weeks, and then Cyberknife the most experienced we have in terms of starts. We’re kind of attacking it from all different angles and hopefully one of them works.”

The Ken McPeek-trained duo of Tiz the Bomb and Smile Happy breezed a half-mile in company in 48 seconds, while  graded stakes winner Classic Causeway went six furlongs in company outside of Sounion 1:13.20

Back in contention for the #KyDerby, Classic Causeway breezed 6 furlongs in 1:13.20. pic.twitter.com/BL7CCFxQ80