Kentucky Derby Scouting Report: 15 to know on the East Coast 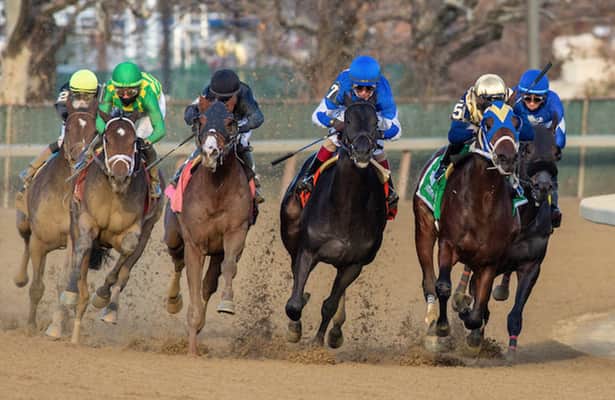 The East Coast division of the 2022 Kentucky Derby trail includes Derby prep races that will be run in New York and Florida. That means stakes at Aqueduct, Gulfstream Park and Tampa Bay Downs.

Thus far, two official points races have been run on the East Coast: the Champagne (G1), which was won by Jack Christopher, and the Remsen (G2), won by Mo Donegal.

Mo Donegal (Circa 50-1, William Hill 35-1 – Uncle Mo – Todd Pletcher – Donegal Racing - 10) Mo Donegal gets the top spot in this first Kentucky Derby Scouting Report for the East Coast division based on his victory in the Remsen (G2) on Dec. 4.

The son of Uncle Mo prevailed after a controversial stretch duel in what has been described as one of the strongest editions of the Remsen in many years. After an inquiry, the stewards at Aqueduct opted to leave Mo Donegal on top despite obvious rough riding by Irad Ortiz Jr. The tactics contributed to the 30-day suspension that was handed down to Ortiz. Mo Donegal got the victory over the talented Chad Brown runner Zandon, who also is in this report as a very promising Kentucky Derby contender.

Mo Donegal broke his maiden in his second start going 1 1/16 miles at Belmont Park, earning an 82 Beyer Speed Figure. He finished third in his debut at Saratoga after starting slowly and then having to steady later in the race. The Remsen victory produced an 89 Beyer.

Pletcher indicated that Mo Donegal will be sent to Florida to prepare for his next start on the Derby trail, with all three East Coast tracks presenting options.

In the Kentucky Derby Future Wager pool 1. Mo Donegal closed at odds of 37-1, which seems like a great price after his Remsen victory.

These contenders are 2-year-old stakes winners, have appeared in Kentucky Derby Future Wager pool #1, and/or already have earned Derby qualifying points. They are listed alphabetically.

Commandperformance (Circa 40-1, William Hill 30-1 – Union Rags – Todd Pletcher – Repole Stable and St. Elias Stable - 6) Even with $220,000 in earnings and six Kentucky Derby points from the Champagne and the Breeders’ Cup Juvenile, Commandperformance is still a maiden after his third start. Looking back, Pletcher feels that maybe he asked too much, too soon from this son of Union Rags.

While running second in the Champagne, he earned a 96 Beyer, the third highest among 2-year-olds this year. In KDFW#1 he closed at odds of 31-1.

The Chad Brown runner was scratched from the Breeders’ Cup Juvenile by the Del Mar veterinarians after being entered. Subsequently, a screw was placed in one of his front shins to correct the problem, and that will keep him off the track for two months. This delay in training prevented him from being the leader in this first Derby Report.

Still, he was part of the KDFW #1, where he closed at odds of 10-1, second among the individual betting interests.

Major General (Circa 75-1, William Hill 55-1 – Constitution – Todd Pletcher – Win Star Farm and Siena Farm - 10) Major General won both of his starts by a neck – once while racing on the lead in a maiden sprint at Saratoga and then with a late rally to win the Iroquois (G3) at Churchill Downs on the Derby trail. He has not raced since earning 10 Derby points in that Sept. 18 victory but still brought odds of 43-1 in KDFW #1.

Zandon (Circa 30-1, William Hill 25-1 – Upstart – Chad Brown – Jeff Drown - 4) Zandon went to the Remsen after a six-furlong maiden victory at Belmont at odds of 5-1. The son of Upstart came with questions about the nine-furlong distance, which he answered as he battled gamely with Mo Donegal while in tight quarters on the inside.

After the race, Chad Brown had strong feelings about the final results of the Remsen. “The horse (Mo Donegal) should have come down. We got beat an inch. I thought we had the best horse in the race, so it’s disappointing.”

Double Thunder (Circa 125-1, William Hill 100-1 – Super Saver – Todd Pletcher – Phoenix Thoroughbreds - 4) Double Thunder is the most experienced horse in this report, with a record of 6: 3-1-0. He won his first two starts in June – a maiden at Monmouth Park and then a last-to-first victory in the Bashford Manor (G3) at Churchill. He added a third win in the Sapling at Monmouth Park going a mile. In the Breeders’ Futurity (G1) at Keeneland, Double Thunder was second between two highly regarded Derby prospects. He was ninth in the Breeders’ Cup Juvenile.

His excellent 2-year-old campaign earned him a spot in the KDFW#1 and odds of 72-1.

Midnight Chrome (Circa 250-1 – California Chrome – J T Servis – Alexandria Stable - 2) Midnight Chrome moved from turf back to dirt in the Remsen, finishing a distant third but picking up a couple of Derby points.

My Prankster (Circa 75-1, William Hill 100-1 – Into Mischief – Todd Pletcher – Lowana and Robert Low – 1) My Prankster picked up a Derby point when he finished fourth in the Champagne. He next ran second in a listed sprint stakes at Keeneland at the end of October.

White Abarrio (Circa 125-1, William Hill 150-1 – Race Day – Saffie Joseph Jr. – C2 Racing Stable and La Milagrosa Stable - 2) – White Abarrio won his first two starts at Gulfstream Park in the fall, taking a maiden and an allowance. After the allowance, going a mile as the odds-on favorite, he shipped to Churchill and finished third in the Kentucky Jockey Club (G2) behind two well-regarded Derby contenders.

Wit (Circa 60-1, William Hill 50-1 – Practical Joke – Todd Pletcher – Repole, St. Elias, and Gainesway Stables - 2) Wit was an early starter and winner for Todd Pletcher, with victories in a maiden and then the Sanford (G2) at Saratoga. Moving up to Grade 1 competition, the son of Practical Joke ran second in the Hopeful (G1) and third in the Champagne.

This is a list of 2-year-olds with impressive maiden victories who might be preparing to make starts in Kentucky Derby prep races.

Forced Ranking (Circa 175-1, William Hill 150-1 – Mastery – Chad Brown – Klaravich Stables) Forced Ranking broke his maiden in his second start in a seven-furlong maiden race at Belmont Park in October as an odds-on favorite for Chad Brown. He pressed the pace and won by almost two lengths. He was included in KDFW #1 and closed at 138-1.

Key Point (Circa 150-1, William Hill 125-1 – Into Mischief – Chad Brown – Jeff Drown) This New York-bred is a home-bred from the same owner as Zandon. He made his only start a victory at Saratoga when he beat state-breds by more than three lengths in a six-furlong sprint.

Kitten Mischief (Into Mischief – Jonathan Thomas – Augustin Stable) Kitten Mischief broke his maiden in his initial start at Aqueduct in November going a one-turn mile at odds of 8-1. He pressed the pace, took the lead with three furlongs to go, and was game to prevail in a stretch duel with the favorite, well ahead of the rest of the field.