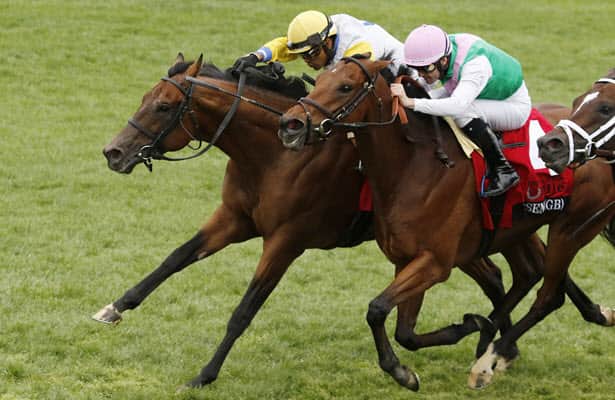 Saturday's 14 race Kentucky Derby day card at Churchill Downs will likely bring a mixture of dominant performances from short-priced stars and long-shot winners who were overlooked in deep fields.

Figuring out which races to single and which races to spread will be the key to cashing lucrative multi-race wagers. Below I analyze two reliable singles and two horses that are sure to outrun their odds and possibly pull off massive upsets.

Race 4: No. 1 McLaren Vale, 9-2 - This son of Gun Runner has had lofty expectations from the start after costing $625,000. He won on debut before running a solid third in the San Vicente (G2) behind Forbidden Kingdom and Pinehurst. He lost to the very promising Elector last time while facing older rivals. He owns a win over a wet track and looks perfectly suited to a one-turn mile. With not much speed signed on, look for him to track Cover Me Up and get first run on his main rivals.

Race 11: No. 6 Shirl's Speight, 3-1 - This rapidly improving horse's win in the Maker's Mark Mile (G1) was a thing of beauty. The horses who finished 2-3-4-5 were positioned 2-1-3-4 early in a slow-paced race. Shirl's Speight was the only horse closing to run down a very talented pair of front runners. Roger Attfield has been around many great horses, and he has always been high on this runner. His potential has turned into results, and I fully expect him to continue his roll against a good, but not great, field. He owns three wins beyond one mile, and I do not see the added distance being a problem on Saturday.

Race 6: No. 8 Injunction, 15-1 - This gelding put together two dominant victories this fall after adding blinkers, the second win coming over a wet surface at Churchill at this very distance. He earned competitive 94 Beyer Speed Figures in both starts. He then had a tough task dueling with arguably the best one-turn horse in the land, Speaker's Corner, in the Gulfstream Park Mile. Last out he was unable to make the lead in a fast-paced sprint and came up just short. With a surprising lack of pace in this race, I expect him to make the lead as Jose Ortiz takes the call. He will take this field a long way at a big price.

Race 12: No. 8 Charge It, 20-1 - The well-bred son of Tapit should love a wet surface and has looked great training over it all week. He has as much upside as anyone in the Kentucky Derby field and has the perfect style to sit a great trip at a distance that looks ideal for him. He would have won the Florida Derby (G1) off just a maiden win if he was not so green. As he continues to mature, look out. Epicenter will be tough to beat, but this horse will get a piece and maybe more if chaos reigns.