Kentucky Derby 2021 rankings: Who is rising, who is falling? 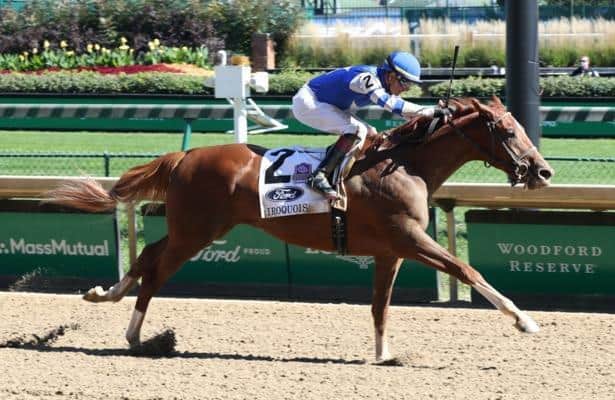 College football ranks its top 25 long before the national championship, and it is never too early to rank the best of the best 2-year-old Thoroughbreds as they look to develop into Kentucky Derby contenders.

The biggest difference between college football's AP poll and HRN's Kentucky Derby poll is that you, the fan, get to determine the ranks based on your vote. These rankings will change weekly as impressive maidens hit the track and will change drastically in a little over a month after the Breeders' Cup Juvenile.

Below, we take a look at the latest top 25 Derby Poll and analyze who is rising, who is falling and which prospects could be the next to take a significant leap into the rankings.

Likable (#17) made the biggest move of any 2-year-old this week with an authoritative maiden win at Belmont Park for Todd Pletcher. The Frosted colt was second on debut sprinting, but dominated throughout when stretched out to one mile. He defeated a pair of promising Chad Brown runners, Engrave and Rational Choice. Look for Likable to make the jump to stakes ranks next out.

Credit River (#23) came out of nowhere to make this list. He was sent off at 41-1 while making his debut against stakes company on the turf in Woodbine's Ontario Racing Stakes. He was visually impressive while closing with a rush to win. Obviously, his connections think highly of him as they ran him against winners as an unraced maiden. He has talent and upside, but this son of More Than Ready eventually will have to prove he can run on dirt to continue his rise into Derby contention. 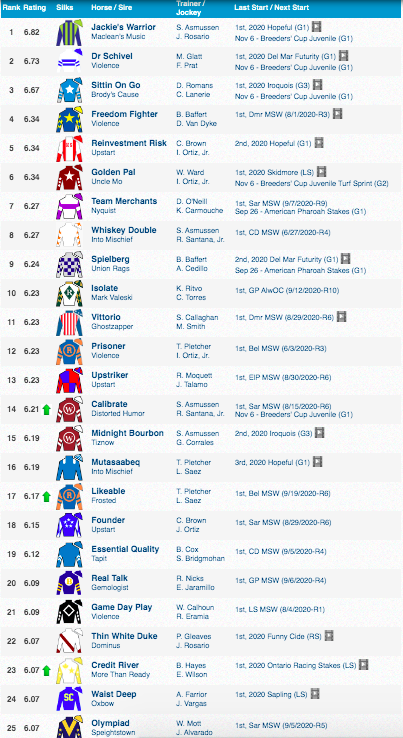 Who is falling?
Super Stock (#35)  fell out of this week's top 25 without even racing as horses with higher upside leapfrogged the Steve Asmussen runner. This colt by Dialed In broke maiden in his third start in a minor stakes race at Lone Star Park before running third in the Iroquois at Churchill Downs. He has the look of a horse that will make a lot of money as a hard-knocking colt, but he also looks a touch slow compared with those surrounding him in the rankings.
American Monarch looked like he could be any kind after winning going long on debut on the turf at Saratoga for Bill Mott. He lost some of his shine this weekend while running fourth in the Summer Stakes at Woodbine. The horse he beat on debut, Chad Brown's Secret Potion, also ran poorly in the Summer Stakes, which makes one question the quality of field that he defeated. By American Pharoah, it is certainly possible that this colt could improve if switched to dirt, and he has plenty of time to soar back up the rankings.
Who could be next?

North Pole (#44) cost $1 million as a yearling and was bet down to even money while sprinting on debut for Simon Callaghan. He disappointed bettors while running second, but he ran like a horse crying out for more ground. He is possible for the American Pharoah (G1) for his next start. If he runs well there, look for this touted colt to make a leap into the top 25.

Speaker's Corner was hammered on debut at Saratoga for trainer Bill Mott, who is not known for winning first time out. He was the talk of all the clockers at the Spa this meet and still could turn out to be a nice colt after running a trouble-filled third. If he wins next time out, he will skyrocket up everyone's Derby lists as this Street Sense colt has as much upside as anyone ahead of him in the rankings.