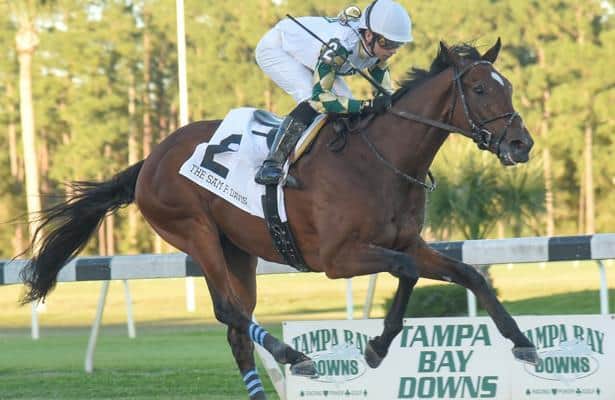 It was as a 22nd birthday gift to his daughter and assistant, Andie, that trainer Patrick Biancone awarded ownership in Sole Volante after fetching him out of a 2-year-old sale last April.

This one keeps giving.

Twice a winner on turf, the son of Karakontie surged past previously unbeaten Independence Hall to emerge as a 2020 Kentucky Derby prospect on dirt in Saturday’s Grade 3, $250,000 Sam F. Davis Stakes.

Biding his time before uncorking a big rally, Sole Volante improved off a third-place finish around one turn in his dirt debut, the Jan. 4 Mucho Macho Man Stakes at Gulfstream Park, and continued to make his $20,000 price tag look like a bargain.

"We love him a lot," Biancone said. "He’s fantastic on the turf and in America, the life is the dirt, so I ran him in a sprint race at Gulfstream just to see if he could handle it and let him take some kickback. He did everything perfectly but ran a little bit early that day and struggled a little the last 1/16.

"Today I said to (jockey Luca Panici), let him relax and run the last 3/8 and that’s what he did."

The Sam F. Davis was made for this sort of late charge with an opening half mile in 46.52 seconds apparently too quick over the Tampa Bay Downs surface. Premier Star and Chapalu dueled up front before odds-on favorite Independence Hall swept past them through the turn, looking as if he’d be the easy winner.

Instead, each of that front-running trio faded in the lane as Sole Volante delivered a winning rally for the Biancones. Leading up to Saturday's race, Reeves Thoroughbred Racing also bought into Sole Volante, whose record now stands at 4: 3-0-1.

Jockey Jose Ortiz reported to trainer Michael Trombetta that Independence Hall's tongue tie came loose in the post parade, "but I’m not saying that as an excuse," Trombetta said. "It’s an inconvenience, and I’m going to have to watch the replay and take it all in. He broke sharp and he was good. He was a little excitable (in the paddock) but he wasn’t terrible, so we’ll see.”

SOLE VOLANTE gets the victory of Independence Hall in the Sam F. Davis Stakes @TampaBayDownsFL for Trainer Patrick Biancone & Reeves Thoroughbred Racing with Luca Panici on the mount! @SpendthriftFarm Road to The Derby on TVG. pic.twitter.com/ICIwHFbrVJ

Having debuted an Oct. 12 debut winner over the lawn at Gulfstream Park West, Sole Volante then went last to first to win the one-mile Pulpit when stepped up in class second out on Nov. 30.

The switch to dirt followed in the Mucho Macho Man, where Sole Volante was third behind a pair of talented Florida-breds, Chance It and As Seen on Tv. Then came the Sam F. Davis breakout, in which he finished up 1 1/16 miles in 1:42.60 under jockey Luca Panici.

A 5-1 shot in the field of seven, Sole Volante returned $13.60 to win. Independence Hall ran second, while Ajaaweed rallied from last to finish out the trifecta. Tiz Rye Time ran fourth in a race where Derby qualifying points paid out on a 10-4-2-1 scale.

“We’re not going to buy the hat,” Biancone quipped of a trip to the Derby, “but we’re going to look for it.”

Biancone saddled Derby starters each year from 2003 to 2005, with his best finish 2004's runner-up for Lion Heart behind the great Smarty Jones.