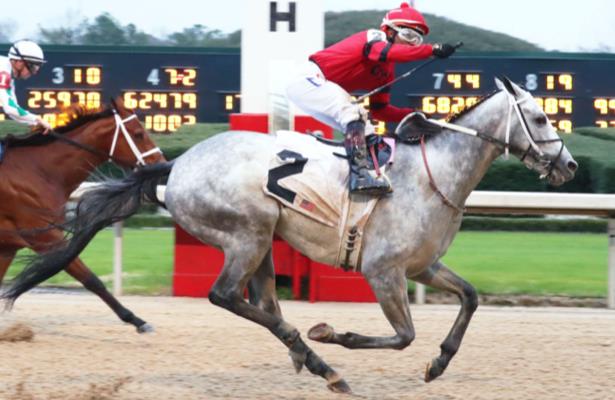 The Declaration of War colt, trained by Steve Asmussen for Ed and Susie Orr, also proved he could excel over a fast track having made a sloppy edition of Kentucky Jockey Club Stakes (G2) his coming out party last November along the Derby trail.

Fourth next in the local Smarty Jones Stakes, Silver Prospector showed marked improvement once ridden into more forward position by jockey Ricardo Santana Jr. He tracked Wells Bayou through opening fractions 22.89 and 46.60 seconds, then tipped out in the stretch to run by.

"The horse has been a little sharper," Asmussen said. "He got a little too far back in the Smarty Jones. Ricardo put him in the race -- we learned from that -- and was in a good position all the way around."

Santana Jr. delivered a confident ride -- as well as a fist pump across the wire with Silver Prospector completing 1 1/16 miles in 1:43.01.

Behind Wells Bayou, favored Answer In ran third after a wide trip. Brad Cox trains them both.

“They ran extremely well," Cox said. "Obviously, set some nice hot fractions, or some hot fractions, and was able continue with a nice run down the lane. I was very pleased with them both. We'll regroup with them and see what's next.”

Shoplifted rallied from last to fourth in a field of nine 3-year-olds. Asmussen trains both Silver Prospector, who paid $11.40, and Shoplifted.

"The series here obviously is quite lucrative," Asmussen said, and he expects Silver Prospector to continue prepping locally on his way back to Churchill Downs.

A $190,000 auction buy as a 2-year-old, Silver Prospector saw his career trajectory change once switch from turf to dirt after three losses. The Southwest score improved his record to 3-0-2 in seven starts.