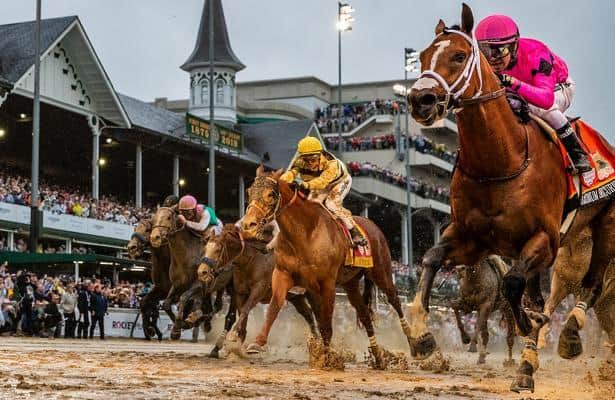 The official Road to the 2020 Kentucky Derby will begin Saturday, Sept. 14, at the home of America’s greatest race when Churchill Downs stages the Grade 3, $200,000 Iroquoisfor 2-year-olds at 1 1/16 miles on opening weekend of its 11-day September Meet.

A series of select races that award a sliding scale of points to the Top 4 finishers, the “Road to the Kentucky Derby” has determined preference for the 20-horse Kentucky Derby field since 2013. The 1 ¼-mile classic for 3-year-old Thoroughbreds – which featured a $3 million purse in 2019 – will be run at the historic Louisville, Ky., racetrack for the 146th consecutive year on Saturday, May 2, 2020.

The total number of races in the primary “Road to the Kentucky Derby” series is unchanged from last year’s lineup, with 35 marquee races scheduled. The Iroquois will again kick off the 19-race “Prep Season,” which features foundation-building races over a minimum of one mile between mid-September and mid-February. Points awarded during the Prep Season are worth 10-4-2-1 to the top four placings, respectively, except for the Breeders’ Cup Juvenile, which is worth twice as much (20-8-4-2).

The 16-race “Championship Series” comprises springboard events that often bring the 3-year-old picture into sharper focus. Most first leg races offer 50-20-10-5 points to the Top 4 finishers, while the most meaningful races are worth 100-40-20-10. Additionally, the Jeff Ruby Steaks (G3) and Lexington Stakes (G3) offer points on a scale of 20-8-4-2 to the first four placings.

In addition to the primary “Road to the Kentucky Derby” series, there are two separate series that each carve out one spot for a potential horse from Europe and Japan.

A similar series remains in place to qualify for the Kentucky Derby’s sister race, the $1.25 million Longines Kentucky Oaks (GI) for 3-year-old fillies at 1 1/8 miles on Friday, May 1, 2020. As was the case last year, there will be 30 races for the “Road to the Kentucky Oaks” series.

See the full schedule and points awarded below, with the option to expand to full screen at the lower right. Don't see an embed? Click here.

Can Ginobili bring his 'A' game to the Big A for Cigar Mile?
Among America’s most notable tracks, there are few...
x close