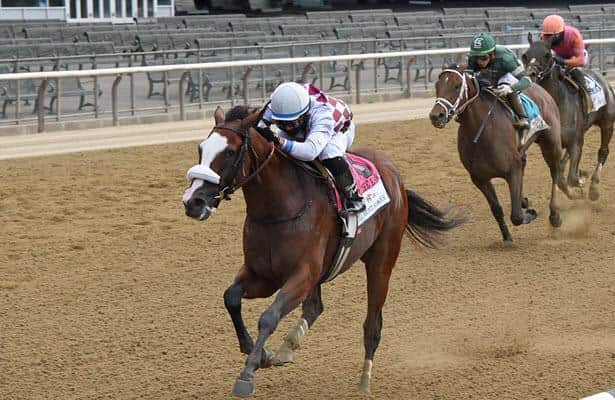 Tiz the Law’s victory in the Belmont Stakes has propelled him to the position of sole favorite in William Hill’s 2020 Kentucky Derby futures, released Monday morning.

Tiz the Law currently sits at 5-2, after the Sackatoga Stable colt, trained by Barclay Tagg, became the first New York-bred horse to win the Belmont since 1882. He opened at 20-1.

The previous favorite, Honor A.P., dropped to the second position, at 7-2 odds after opening at 50-1. Honor A.P. did not run in the Belmont but won the Santa Anita Derby, which previously had him tied with Tiz the Law at 4-1 odds.

The only other horse currently with single-digit odds is Authentic, the Bob Baffert-trained colt that finished second to Honor A.P. in the Santa Anita Derby after previously winning the G2 San Felipe Stakes at Santa Anita.

The third-place finisher at the Belmont, Max Player, has made less of a move up the favorites leaderboard and currently has 60-1 odds. The colt, trained by Linda Rice, opened at 75-1.

William Hill's futures can be played in person or through its app in Nevada, with a full look at the odds below: