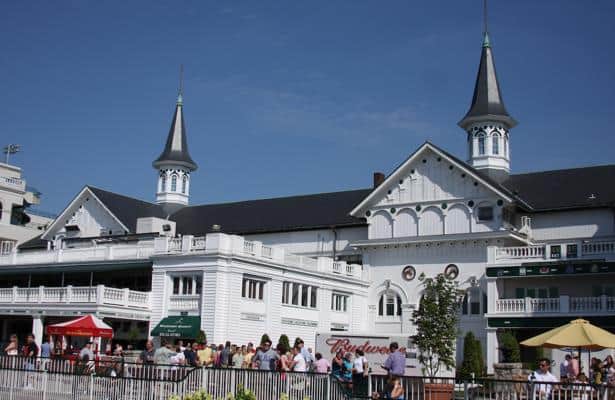 With less than a month until the 2020 Kentucky Derby, which was rescheduled for Sept. 5, decisions are being made among contenders over whether to run. Here's the list of possible horses as it is currently known, along with their points total and ranking on the Kentucky Derby leaderboard.

The Derby has always been the plan for the colt, who is trained by Barclay Tagg and won the Belmont Stakes and Travers.

“This is the greatest springboard to move on to Kentucky, and I think he's proven today that he certainly is a mile and a quarter horse and Barclay has said that all along,” Jack Knowlton, managing partner of owner Sackatoga Stable, said after the Travers.

Trainer Bob Baffert announced after the colt won the Haskell Stakes that he would be heading to the Run for the Roses.

“We’re going to work on him a little until then,” Baffert said. “I was pretty proud of him. He ran well. I might have to put a little blinker on him because he went to idling on me."

After the colt established himself as a top contender with a decisive win in the Ellis Park Derby, owner Bruce Lunsford made it clear that the Derby is the next move for the Tom Drury-trained son of Bernardini.

“I’m going to enjoy the ride for the next four weeks,” Lunsford said. “I’m going to treat every day as if I have the winner. Because the last race only lasts two minutes, but I’ve got four or five weeks in front of me that can be super.”

The winner of the Santa Anita Derby has been aimed at the Kentucky Derby for most of the year, with a release from Del Mar confirming that his recent work is in preparation for that race.

“It was a terrific move,” Del Mar Clocker Toby Turrell said of the colt’s latest five-furlong work. “You could have just as easily given him a six furlong time, and his gallop out was outstanding. His seven-furlong time is the best gallop out we’ve seen here this summer.”

After a second-place finish in the Haskell, trainer Saffie Joseph Jr. said he was satisfied with the finish after coming in less than a length short of Authentic. He also made clear the plans for the colt in a Gulfstream Park press release.

“I think I’ve lost a claimer and been more upset. For some reason, I didn’t feel any disappointment, because I know where we’re trying to get — to the Derby,” Joseph said. “I just thought it was another step forward again. I didn’t want to see any regression. That was my biggest thing — not seeing any regression.”

King Guillermo has been working at Churchill Downs in preparation for the Derby, with his last work on Saturday, going five furlongs in :59.40.

“He really likes it in Kentucky,” trainer Juan Avila’s exercise rider, Edgar Medina, said in a Churchill Downs release. “Since we got here, he keeps doing better and better. Who knows what the future can hold for him?”

Following a win in the Shared Belief Stakes at Del Mar in August, Baffert said he would send the colt to the Kentucky Derby.

“I thought he had a chance to win today,” Baffert said in a Del Mar release. “I could tell he was a different horse down here. His whole mind changed. His color changed. He had soured out on me, but we got him going the right way. I think he earned his way to the Derby.”

Trainer Todd Pletcher was feeling good about Dr Post’s recent work going in to the Derby, though he has not yet announced a rider for the race.

“He’ll work five-eighths (Aug. 21), probably five-eighths the following week and just keep on a weekly schedule up to the Derby,” Pletcher said in an HRN repot.

Max Player recently was moved to Steve Asmussen's barn to prepare for the Run for the Roses.

"I think Linda Rice did a great job with this horse," owner George Hall said in an email. "Even though Tiz the Law beat him twice, he's progressed every step of the way. He continues to improve and we're hoping he will improve even more in the Kentucky Derby."

According to trainer Gustavo Delgado’s son Gustavo Delgado Jr., the second-place finisher in the Grade 3 Peter Pan and the Travers has been improving in training.

"The main thing is that we wanted to get the points to get to the Derby, and he did that," Delgado said in a NYRA release. "He's on the improve. He will tell us how much he can improve over the next few races."

Pneumatic will not be going to the Kentucky Derby despite having the points needed, instead opting to train for the Preakness.

"So it was just kind of a series of starts and stops and delays, kind of reroute," Fiske said Monday. "I think at one point we were thinking about the West Virginia Derby, and then that got canceled. It’s just a screwy year, it’s hard to get a series of races together, like I said, at the proper distance in the proper time frame."

Caveat: Fiske said it's still possible he could run if, say, Tiz the Law were to back out.

Trainer Mark Casse said he expects the colt to show improvement in the Derby following a fourth-place finish in the Blue Grass (G2). The son of Tapit will run almost two months removed from his last race.

“I think he’s going to come back and be stronger for his next start” Casse said. “I think Churchill is, most of the time, a little kinder to closers than, say, Keeneland is.”

The second-place finisher in the Blue Grass, owned by Peter Callahan, will most likely head to the Kentucky Oaks, where she's atop the leaderboard with 450 points.

“Peter and I will sit down and talk about it, but we're leaning pretty hard to the Oaks,” trainer Kenny McPeek said. “Tiz the Law's race here last week was ultra-impressive and if you hold the two against each other, I'm not sure we want to be up against him yet.”

Owners Jim and Donna Daniell have delegated the Derby decision to trainer Michael McCarthy, who has not indicated a choice yet, though the colt has yet to be nominated.

“They’re going to leave that up to me,” McCarthy said in July. “Obviously, we go back and forth as the time draws closer.”

Trainer Greg Foley said in late July that the colt was working straight to the Derby and had been looking strong.

“He’s fit as he can be anyway,” Foley said. “He gallops every day, he looked great this morning, the last few mornings. Just really aggressive and good, and he’s put his weight back on. We’re very happy with him right now.”

For a time it a appeared that the 2019 Eclipse Award winner wouldn’t be able to get in to the Derby after a sixth-place finish in the Arkansas Derby. But trainer Peter Eurton removed the blinkers from the colt and his form improved, leading to his qualification after a third-place finish in the Ohio Derby (G3).

"The owners feel that he has earned the right to go there," Eurton said. "Especially at the mile-and-a-quarter distance, he deserves a shot. I think it’s a tough race, but that has never scared us away before."

After a second-place finish in the Ellis Park Derby on Aug. 9, trainer Dale Romans said the colt most likely will run in the Kentucky Derby.

“That’s the best race he’s run for us so far, I think,” Romans said of the Ellis Park trip. “With that being said, we should probably try the Derby.”

The colt qualified for the Derby on the strength of a second-place finish in the Tampa Bay Derby in March.

“We’re delighted with him,” his trainer, Patrick Biancone said in late July. “He had a nice two-minute lick (Tuesday) morning. It’s fantastic. He’s back to his best. And we’re going to come fresh on the 5th (of September) for the Derby.”

It took some help, but the colt made it to the top 20, and owners Dr. Arnaldo Monge and Rey Hernandez are opting to put him in the race.

“God has a plan, I guess, and you can’t question destiny,” Monge said. “He made the Derby, so we’ll find the best way we can to get him ready.”

Though outside the original top 20, Winning Impression will run in the Derby after several opt-outs.

“Winning Impression will point for [the Kentucky Derby],” a tweet from West Point Thoroughbreds reads. “Know he’ll be a huge longshot, but [trainer Dallas Stewart] longshots have come runnin’ in the past.”

The runner-up in last week's Pegasus Stakes is instead opting for the Grade 2 Jim Dandy at Saratoga, according to a press release from his trainer, Jose D'Angelo.

"Considering that we would have to implement blinkers, [the owners] and I have decided not to participate in the Kentucky Derby in 2020, in Churchill Downs, the temple of horse racing," D'Angelo said. "We have decided that this is not the right time for us to compete against Tiz the Law.”

The colt, who was claimed specifically because he was a contender to be in the Derby, will go if given the opportunity, trainer Chris Hartman said after a third-place trip in the Ellis Park Derby. He was pessimistic at the time, but the colt slid is in the top 20 after injuries and opt-outs.

“If there’s any way that there would be an open spot, he will be there for sure,” Hartman said. “But I don’t think that’s going to happen.”

According to his trainer, Eric Kruljac, the colt is "very unlikely," for the Kentucky Derby and will instead focus on turf racing.

Despite not having any points on the road to the Derby, the colt would have the chance to run if fewer than 20 horses with points decide to go. Trainer Roger Attfield praised him after a blistering :57.00 five-furlong effort on Thursday.

"We wanted to sit behind a couple of other horses to get some dirt in his face and see how he reacted to that," Attfield said. "He handled that quite well, it didn't bother him one bit."

The Todd Pletcher-trained colt could get a Derby chance if fewer than 20 horses with points opt to run.