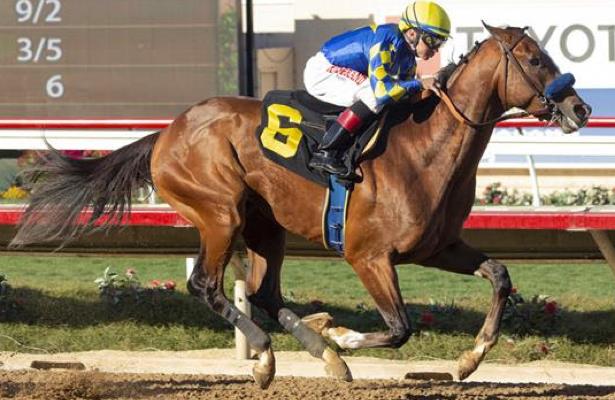 Jim Bakke and Gerald Isbister’s Attachment Rate worked five furlongs in 1:01.20 over a fast main track Sunday morning at Churchill Downs as he completed his major preparations for Saturday’s 146th running of the $3 million Kentucky Derby.

At nearby Trackside Louisville, Belladonna Racing’s Bayerness completed her major work for Friday’s $1.25 million Kentucky Oaks by working a half-mile in company in :48.20 for trainer Cherie DeVaux.

Jim and Donna Daniell’s Rushie will target Saturday’s $500,000 Pat Day Mile rather than the Kentucky Derby, according to vice president of racing Ben Huffman.

“If he’s happy, we’re happy,” said trainer Tommy Drury as he stood alongside his prized colt while he grazed near Barn 3. “He came out of his work in great shape and we’re just keeping him as happy as possible.”

“I thought his race at Ellis made him worthy of trying the Derby,” trainer Dale Romans said. “This was his second work back from the (Ellis Park Derby) and we wanted to put a nice five-eighths move in him. He ran well over the winter in both the Gotham and the Unbridled. He hung in there pretty well to finish second behind Art Collector at Ellis.”

Attachment Rate is scheduled to walk the shedrow Monday.

With Hall of Fame trainer Bob Baffert keeping watch, Authentic worked solo with exercise rider Juan Ochoa in the irons en route to posting his fourth consecutive bullet move. The son of Into Mischief has had Baffert singing his praises with the way he has progressed since capturing the Haskell Stakes (GI) at Monmouth Park on July 18.

“Authentic is really doing well. I see him turning the corner,” Baffert said. “Both of my horses (Authentic and Thousand Words), I think they’re live. We just need some luck, you never know what is going to happen with that many horses in there.”

Authentic is scheduled to arrive at Churchill Downs on Monday on a flight from Southern California.

ENFORCEABLE — John Oxley’s Enforceable returned to the track a day after working a half-mile in :49.60 for a leisurely jog once around the track and a visit to the new Kentucky Derby starting gate under assistant trainer David Carroll.

Enforceable jogged in the mile chute before standing in the gate and then jogging around the track.

FINNICK THE FIERCE — Arnaldo Monge and trainer Rey Hernandez’s Finnick the Fierce continued his Kentucky Derby training at The Thoroughbred Center in Lexington.

Seventh in the Blue Grass (G2) in his most recent start, Finnick the Fierce galloped a mile and a quarter this morning and will train there again Monday morning before vanning to Churchill Downs Monday afternoon.

Martin Garcia has the Derby mount.

HONOR A. P. — C R K Stable LLC’s Honor A. P. completed his final major workout by breezing seven furlongs Saturday afternoon in 1:27.20 over a fast Del Mar track about an hour before the first race. Regular rider Mike Smith was aboard.

“I just wanted an easy seven-eighths,” trainer John Shirreffs told the Del Mar publicity office. “He got it; we’re good to go now.”

Honor A. P. is scheduled to ship to Churchill Downs on Monday.

Trained by Greg Foley, Major Fed schooled in the paddock before jogging about a mile with exercise rider Margarito Fierro aboard.

MAX PLAYER — George Hall and SportBLX Thoroughbred’s Max Player was one of the first Kentucky Derby probable entrants to train at Churchill Sunday, galloping 1 1/2 miles under Juan Vargas at 5:50 a.m.

MONEY MOVES — Robert LaPenta and Bortolazzo Stable’s Money Moves, who worked five furlongs in 1:00.14 at Saratoga on Friday for trainer Todd Pletcher, is scheduled to ship to Churchill Downs on Monday.

Money Moves returned to the track Sunday morning and galloped 1 3/8 miles and is scheduled to do the same Monday before shipping.

“The horse ran well last time out and has been training sharply,” said Pletcher, who is not coming to Louisville. “I felt like it’s an opportunity you don’t get very often. He’s doing well so we figured we would take a shot.

“We were really pleased with his breeze [Friday morning]. I thought it went extremely well and he came out of it in good shape [Saturday] morning. I spoke to [co-owner] Jerry Bortolazzo and everyone is excited about the opportunity. We figure it's a once-in-a-lifetime opportunity for these guys to take a shot with a horse that is training well.”

Javier Castellano has the Derby mount.

Third in the Ellis Park Derby and Indiana Derby in his past two starts, Necker Island is scheduled to return to the track Monday morning. Miguel Mena has the Derby mount.

NY TRAFFIC — John Fanelli, Cash is King and Paul Beaverman’s Ny Traffic returned to the track for the first time since his Friday work (:59.45 for five furlongs) and jogged a mile at Saratoga. He is scheduled to join likely Kentucky Derby favorite Tiz the Law on a flight from upstate New York Monday.

RUSHIE — Jim and Donna Daniell’s Rushie will target Saturday’s $500,000 Pat Day Mile rather than the Kentucky Derby, according to vice president of racing Ben Huffman.

Trained by Patrick Biancone, Sole Volante will be ridden by Luca Panici.

The 2019 Breeders’ Cup Juvenile winner is scheduled to fly to Louisville Monday and Eurton will be here Tuesday morning.

Julien Leparoux has the Derby mount.

TIZ THE LAW — Sackatoga Stable’s Tiz the Law walked the shedrow at trainer Barclay Tagg’s barn at Saratoga a day after working five furlongs in :59.21.

The presumptive favorite for Derby 146 is scheduled to arrive at Churchill Downs Monday.

Manny Franco has the Derby mount.

“It’s cliché but he seems to really be training well,” Stewart joked. “We’re in the big dance and we’ll be ready to roll.”