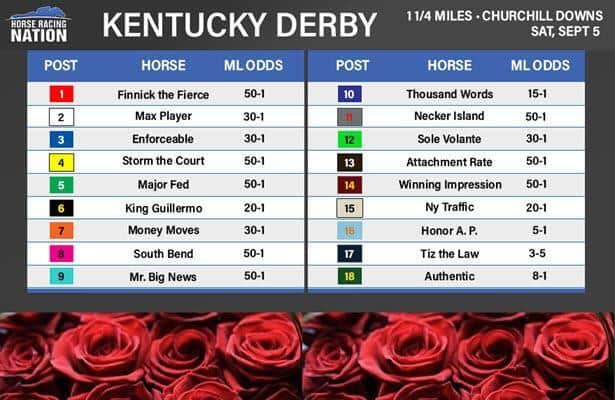 No horse has ever won the Kentucky Derby from post 17. But it could be argued that no horse like Tiz The Law has ever drawn into that position.

The last horse announced at Tuesday’s draw, Tiz the Law was made the 3-5 favorite against 17 rivals for Saturday’s 146th running of the race. The Belmont and Travers stakes winner carries the shortest morning-line odds for the Derby since the coupled entry of Easy Goer and Awe Inspiring was installed at the same price in 1989.

Tiz The Law’s competition was diluted early Tuesday when Blue Grass winner Art Collector, as short as 9-2 in Las Vegas futures, was withdrawn. He nicked the bulb of his left front heel with a hind hoof during a Monday gallop.

Only two other horses — Santa Anita Derby winner Honor A. P. (5-1) and Haskell-winning pacesetter Authentic (8-1) — carried single-digit odds in Mike Battaglia’s 47th consecutive Derby morning line. Honor A. P. drew into post 16 and Authentic into the outside at 18. Churchill Downs analyst Ed DeRosa said the odds against the three shortest-priced horses drawing the three outside gates are more than 800-1.

Tiz The Law gives lead owner Jack Knowlton and trainer Barclay Tagg a chance for a second Derby victory to go with the one they enjoyed 17 years ago with their gelding Funny Cide. Jockey Manny Franco will literally be along for the ride as he tries to get his first Derby win.

After training 50-1 long shot Giacomo to an unlikely Derby victory in 2005, John Shirreffs has Honor A. P. coming in off a second-place finish in the Shared Belief Stakes at Del Mar. He could become the ninth horse in the last 20 years to lose his final prep and then win the Derby.

Authentic is expected to set the early pace for his Hall of Fame connections. Trainer Bob Baffert looks for his sixth Derby win and jockey John Velázquez for his third. Baffert's other Derby horse, Shared Belief Stakes winner Thousand Words (15-1), is the fourth choice after drawing post 10.

The field of 18 will occupy stalls 2-19 in the new 20-horse starting gate, which replaces the setup that created the equivalent of a three-stall gap between 14 and 15.

1. Finnick the Fierce, 50-1 (Rey Hernandez/Martin Garcia): The one-eyed colt ran second, finishing just ahead of Tiz the Law, in the Kentucky Jockey Club Stakes in November, but since then his only on-the-board stakes finish was a third in the Arkansas Derby behind Nadal and King Guillermo.

2. Max Player, 30-1 (Steve Asmussen/Ricardo Santana Jr.): Third to Tiz the Law in his last two, the Belmont and the Travers, owners switched this colt to the Steve Asmussen barn and hope this closing-style runner will improve on those finishes here.

3. Enforceable, 30-1 (Mark Casse/Adam Beschizza): The Tapit colt has raced 10 times but only once since March, finishing fourth in the Blue Grass Stakes in July. He showed promise with a fast-closing win in the LeComte Stakes in January and a runner-up finish in the Risen Star Stakes in February.

4. Storm the Court, 50-1 (Peter Eurton/Julien Leparoux): Hasn't won in five starts since his victory in the Breeders' Cup Juvenile in November at Santa Anita. The owners believe he can get the Derby distance and are taking a chance here.

6. King Guillermo, 20-1 (Juan Carlos Avila/Samy Camacho): This lightly raced colt hasn't raced since May, as trainer Juan Carlos Avila opted to train him up to the race. He won the Tampa Bay Derby in March and finished second in the Arkansas Derby in May in his only two starts this year. Figures to be right near the front with Authentic.

7. Money Moves, 30-1 (Todd Pletcher/Javier Castellano): Coming in off a second-place finish in a Saratoga allowance race, this colt has never tested stakes company and gets the acid test here in the Derby.

8. South Bend, 50-1 (Bill Mott/Tyler Gafflione): Finished fourth in the Travers last time. The owners are taking a shot with this last-minute entry into the race.

9. Mr. Big News, 50-1 (Bret Calhoun/Gabriel Saez): Won the Oaklawn Stakes in the slop back in May, but are taking a shot with this last-minute Derby entry.

10. Thousand Words, 15-1 (Bob Baffert/Florent Geroux): Possibly trainer Bob Baffert's best chance for another Derby win, this colt finished a poor fourth in the San Felipe in March and eleventh in the Oaklawn Staks in April. He then rebounded with a second in the Los Alamitos Derby before beating Honor A.P. in the Shared Belief on Aug. 1 at Del Mar.

11. Necker Island, 50-1 (Chris Hartmann/Miguel Mena): This horse was claimed for $100,000 just two races ago. He finished third in the Indiana Derby and Ellis Park Derby and are looking for an improved performance at Churchill Downs.  He will race with blinkers off in the Derby.

12. Sole Volante, 30-1  (Patrick Biancone/Luca Panici): He finished a disappointing sixth in the Belmont Stakes, finding himself 15 3/4 lengths behind Tiz the Law that day. Trainer Biancone has opted to train him up to the Derby, not having raced since June 20.

13. Attachment Rate, 50-1 (Dale Romans/Joe Talamo): Had had a series of wide trips and comes in off his best finish yet, a second-place finish to Art Collector in the Ellis Park Derby.

14. Winning Impression, 50-1 (Dallas Stewart/Joe Rocco Jr.): Likely to be one of the longest shots in the field, he finished seventh in his last two starts - the Indiana Derby and Ellis Park Derby.

15. Ny Traffic, 20-1 (Saffie Joseph Jr./Paco Lopez): This Cross Traffic colt has been knocking on the door all year long and comes in off three consecutive second-place finishes in the Louisiana Derby, the Matt Winn and the Haskell Stakes.

16. Honor A.P., 5-1 (John Shirreffs/Mike Smith): Likely second choice was an impressive winner of the Santa Anita Derby in June before being upset by Thousand Words in the four-horse Shared Belief Stakes on August 1 at Del Mar.

17. Tiz the Law, 3-5 (Barclay Tagg/Manny Franco): The biggest favorite in over a decade comes in off dominant wins in the Travers (G1) and Belmont Stakes (G1) and a near-perfect record of six wins in seven starts. His only loss was a third-place finish in the slop at Churchill Downs in the Kentucky Jockey Club last November.

18. Authentic, 8-1 (Bob Baffert/John Velazquez): Barely held on to win the Haskell Stakes (G1) by a nose over Ny Traffic, he is one of two Bob Baffert runners in this year's Derby. He is four of five lifetime and could be the pacesetter in the race.

Charge It returns a winner at Gulfstream Park
Charge It made a much-anticipated and triumphant r...
x