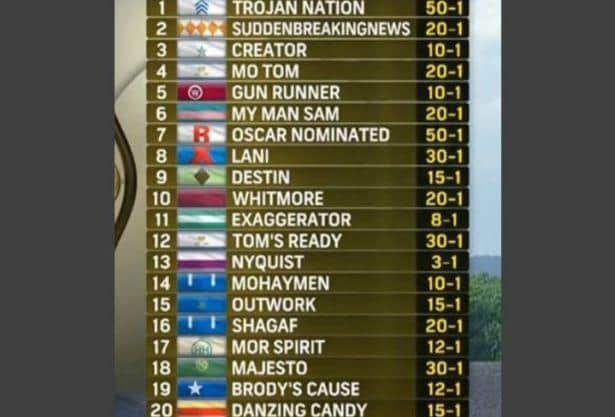 Nyquist drew post 13 for Kentucky Derby 2016 and was installed as the 3-1 morning line favorite. The Uncle Mo colt is unbeaten in seven starts, including wins in the Breeders’ Cup Juvenile, the San Vicente, and the Florida Derby. The Doug O’Neill trainee will be ridden by Mario Gutierrez.

After winning the Holy Bull and the Fountain of Youth, Mohaymen disappointed with a fourth place finish in the Florida Derby. The son of Tapit will leave from post 14.

Risen Star and Louisiana Derby winner Gun Runner drew post 5. Exaggerator, who last won the Santa Anita Derby in the slop, will depart from post 11. The dreaded one hole was drawn by Trojan Nation.

Suddenbreakingnews (Post position 2, morning line 20-1) – Donnie Von Hemel (trainer) – “It's good with us. He's surrounded by horses with similar running styles and shouldn't get shuffled back. He should be able to get comfortable from there."

Creator (Post position 3, morning line 10-1)/Gun Runner (Post position 5, morning line 10-1) – Steve Asmussen (trainer) – “Creator, he's kind of out the back early. He won't have a long ways to go left to find the fence early. (Gun Runner) "It's looks like all the pace is to the outside. Hopefully, prerace, everything goes smoothly. Hopefully, he stands up in the gates. Hopefully, he's away from there really good. But, we're very anxious right now with a very good horse going into the Derby. He's a tremendous horse. You want a good trip to show who he is.''

Mo Tom (Post position 4, morning line 20-1) – Tom Amoss (trainer) – “I think the two most significant things about the draw are we drew toward the rail but not so close that it's a problem, and that there's a lot of speed way on the outside in this post-position draw. Those horses are going to have to be used out of the starting gate, and that I think will ensure a good pace, which is what we need.''

My Man Sam (Post position 6, morning line 20-1)/Shagaf (Post position 16, morning line 20-1) – Chad Brown (trainer) – “I’m fine with both posts. I was looking for an inside post with My Man Sam so six will work just fine and we were looking for something on the outside with Shagaf with as big as he is so he’ll stay out of trouble. Sixteen will work just fine. So now it’s just up to the horses and the jockeys.”

Lani (Post position 8, morning line 30-1) – Mikio Matsunaga (trainer) – “It was a good draw, ideal. The middle was ideal so I have no complaints about drawing number eight.”

Destin (Post position 9, morning line 15-1)/Outwork (Post position 15, morning line 15-1) – Todd Pletcher (trainer) – “I’m good with them. We like the 15 for Outwork. It gives us some room inside between the gates. And I’m OK with the nine for Destin. The only thing that concerns me is the horse inside Destin (Lani, the Japanese representative).  I have some concern about that horse acting up. But the posts themselves are fine.”

Whitmore (Post position 10, morning line 20-1) – Ron Moquett (trainer) – “We're tickled with it. All we've been wanting is a good post and a good trip. Last year, we didn't get a good post and I don't know if it would have changed anything, but this year we have a better post and a better horse."

Exaggerator (Post position 11, morning line 8-1) – Keith Desormeaux (trainer) – “I’m fine with it. Kent (Desormeaux, his brother and his rider) seems a bit concerned because he’ll have to wait some after they load. But I don’t see a problem. The horse is as cool as a cucumber. It’ll be fine.”

Mohaymen (Post position 14, morning line 10-1) – Kiaran McLaughlin (trainer) – “We’re happy. He’ll be the last one in the main gate, so it’s great. There’s a little space between the two gates. There are a lot worse posts, so we’re happy.”

Brody’s Cause (Post position 19, morning line 12-1) – Dale Romans (trainer) – “At first, I was a little bit disappointed, but after looking at the draw with the speed (Danzing Candy) outside of us, we’ll let him clear. I think it’s going to be all right.”

Danzing Candy (Post position 20, morning line 15-1) – Cliff Sise (trainer) – “At first you're kind of stunned when they say 20, but when you start thinking about it, it's not that bad. It's better than the one-hole, especially for a speed horse -- he can come over very gradually and he won't sit in the gate long. Actually, it might be in our favor. We're outside of any other speed horse, so we'll take it.”