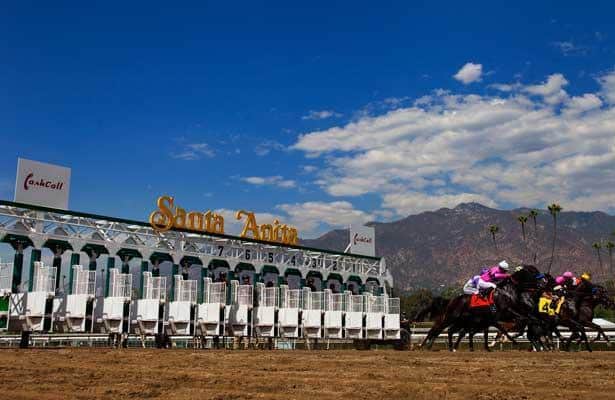 Trained by Jerry Hollendorfer, Kentuckian was dispatched as the heavy 3-5 favorite in a field of eight at Golden Gate and drew off easily under Russell Baze while covering six furlongs in a rapid 1:08.80  A $610,000 Keeneland September yearling, Kentuckian is by two-time Breeders’ Cup Classic winner Tiznow and is out of the Unbridled’s Song mare Forest Music.

Kentuckian, who earned a Beyer Speed figure of 90 in the maiden win, drew post position two and will be ridden by Rafael Bejarano.

Trainer Dan Hendricks will saddle combacking Om, who has been idle since breaking his maiden by 7 ¼ lengths at Del Mar on Aug. 9.  Owned by the Sareen Family Trust, Om is a Kentucky-bred colt by Munnings and he earned a San Pedro best last-out Beyer of 98 in running 6 ½ furlongs on Polytrack in 1:15.60.  A well beaten fifth at 5-2 first time out on June 20, Om was off at 22-1 for the maiden score under Fernando Perez, who rides him back.

Trainer Art Sherman’s Well Maybe comes off a solid 2 ½ length allowance win going 6 ½ furlongs Feb. 21 and seeks his third consecutive win for owner Ed Allred.  With regular rider Joe Talamo out for the week due to a sore shoulder, Mike Smith will take over from the rail.  A Florida-bred gelding by Yes It’s True, Well Maybe has two wins from three starts.

Although he’s stopped badly in his last two starts, the 6 ½ furlong turf Baffle Stakes on Feb. 15 and the Grade II, seven furlong San Vicente on Feb. 1, trainer Peter Miller’s Serbian Syclone has a good outside draw with new pilot Tyler Baze and the cutback in distance may also be to his liking.  A Kentucky-bred colt by Wildcat Heir, Serbian Syclone is owned by Rockingham Ranch and has two wins from five starts.

The only graded stakes winner in the lineup, trainer Michael McCarthy’s No Problem took the Grade III, seven furlong Bob Hope Stakes three starts back at Del Mar Nov. 15 and he’s also the leading money earner in the field with $92,860 to his credit.  Fifth, beaten 14 ½ lengths two starts back by recent Santa Anita Derby winner Dortmund in the Grade I, 1 1/16 miles Los Alamitos Futurity Dec. 20, No Problem ran an even fifth in the 6 ½ furlong turf Baffle Stakes Feb. 15.  A Kentucky-bred ridgling by Munnings, he would appear better suited to the conditions of the San Pedro.

Hronis Racing’s Yiannis prevailed by a nose going 5 ½ furlongs in his debut over Gimme Da Lute, who flattered Yiannis by breaking his maiden versus California-breds in his next start and by registering a sensational 5 ¼ length win in Santa Anita’s Echo Eddie Stakes last Saturday.  A $560,000 2-year-old in training sale purchase in March, 2014, the Kentucky-bred ridgling by Midshipman was the 4-5 favorite in his debut.