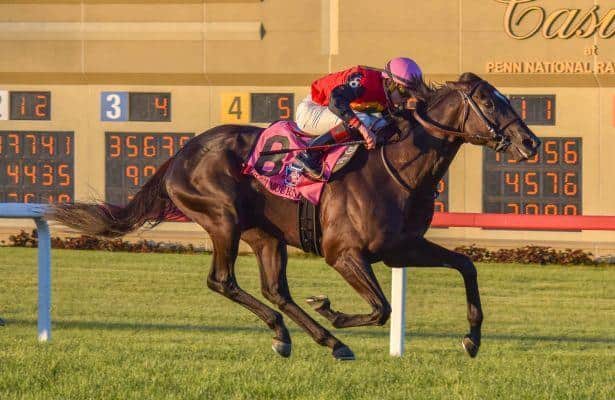 The Kentucky-bred trained by Christophe Clement has a career record of three wins and a second from five starts with earnings of $417,800. In his most recent outing, Frostmourne won the $500,000 Grade II Penn Mile at Penn National Racecourse on June 3. Previously, the son of Speightstown finished second beaten a half-length in the $100,000 Woodhaven Stakes at Aqueduct on April 22.

WinStar Farm, Al Shaqab Racing, and China Horse International’s Master Plan is the morning-line second choice. The Kentucky-bred trained by Todd Pletcher has a career record of three wins, a second, and a third from seven starts with earnings of $333,490. In his most recent outing, Master Plan notched a 1¼-length triumph in the $50,000 Stanton Stakes at Delaware Park on June 10. Previously, he finished fifth in the Grade III Peter Pan Stakes at Belmont Park on May 13 and third in the Group 2 UAE Derby at Meydan in the United Arab Emirates on March 25.

Fletcher and Carolyn Gray’s Zinger, a half-brother of 2016 Delaware Handicap winner I’m a Chatterbox, will be seeking his first career stake victory.

In his most recent, the Kentucky-bred locally conditioned by trainer J. Larry Jones finished fourth to Master Plan, after being checked on the far turn, in the $50,000 Stanton Stakes at Delaware Park on June 10. Previously, the son of The Factor from the dam Chit Chatter posted a 5¼-length triumph in a mile and a sixteenth off the turf allowance at Pimlico on May 25. He has a career record of two wins, four seconds, and a third from ten starts with earnings of $88,910.

“We did not get the trip we would have liked to have had in our last, but I do not know how much difference that would have made in the outcome,” said trainer J. Larry Jones. “It definitely looked like Master Plan had everything measured, but we do hope to get a cleaner trip. He is I’m a Chatterbox’s little brother. We just hope he continues to keep stepping his game up. He seems to be improving all the time. He is training well right now, so we are just hoping for good things.”

at a mile and an eighth (Turf)