Kent Desormeaux, grateful to be back, looks for a win 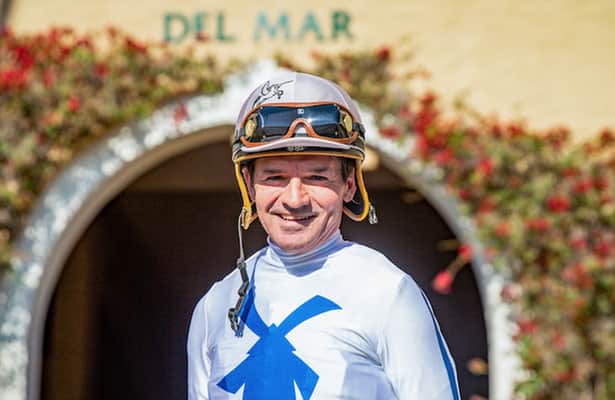 One week into his return to the races, Kent Desormeaux said he couldn’t feel better. The Hall of Fame jockey has ridden in nine races during Del Mar’s fall meet and has yet to win, but he has a second and a third and knows the wins will come.

“I didn’t forget how to do that,” Desormeaux said about winning. “I’ve done that 62-hundred times. I don’t care that anybody calls me ‘oh-fer’ right now. I’m pretty sure with the confidence of an owner and trainer we’ll get the job done.”

To be exact, Deormeaux has 6,116 victories over his 36-year career. But he finds himself once again coming back from a suspension directly connected to his alcoholism and having to prove himself all over again.

“I was oddly enthused,” Desormeaux said about his first week back. “My first rides were not stellar, but I was still very excited. I was glad to be back in the saddle, and it was fun to be out there.

“The appreciation was there,” he continued. “I was grateful to Del Mar for allowing me to pilot the ponies.”

Desormeaux was suspended from racing in January because of an altercation in the Del Mar RV park last fall. It was the third time in two years he had been suspended for alcohol-related issues.

Now he has been sober for 90 days. He has gone through rehab and believes this time will be different because he’s taking the initiative rather than being told he had to do it.

“This time I’m doing it,” Desormeaux said. “I want to. No court orders. I want to be sober, and any alcoholic will understand exactly what that means. I’m not being told where to be. I want to be there.”

He said rock bottom for him was needing permission to ride, and the fact that his situation up at Santa Anita is "to be determined" bothers him greatly.

“I’m very excited to return to my backyard at Santa Anita,” Desormeaux said. “I feel remorseful that there is a delay because of my off-track character.”

That aside, Desormeaux is finding plenty of support from the people in the industry.

“So many well wishes and encouraging comments,” Desormeaux said. “That’s humbling to be missed. People get used to seeing me so now that I was away for a while they have someone that they know, who’s been in the business, to pull for again.”

Desormeaux has won three Kentucky Derbies, six Breeders’ Cup races, three Eclipse Awards and he’s in the Hall of Fame. Which raises the question, what does a guy with so many achievements have to prove at this stage of his career?

“Mostly my desire to be sober and clean,” Desormeaux said, “and make each and every person proud of the legend that I’m supposed to be. I think with a chance, even after hitting rock bottom, I want prove that I can do it. I want to show that it can be done.

“It’s a great motivator,” he continued. “It certainly helps me to wake up in the morning.”