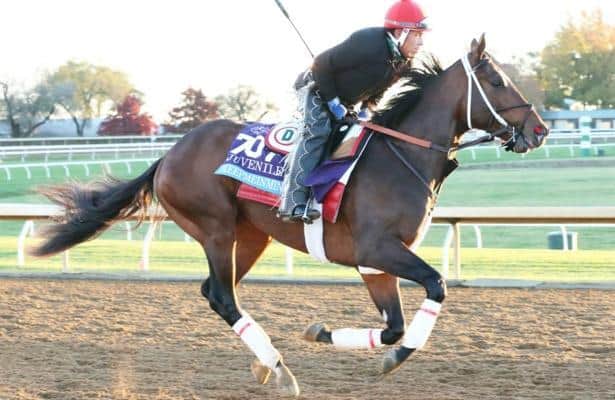 Keepmeinmind worked a half-mile in :50.2 Wednesday morning at Oaklawn, his first breeze since winning the $200,000 Kentucky Jockey Club Stakes (G2) for 2-year-olds on Nov. 28 at Churchill Downs.

Regular rider David Cohen was aboard for the work, which came over a fast track and ranked 39th of 94 recorded at the distance. Keepmeinmind arrived Dec. 27 in Hot Springs after previously being in light training at Kentucky’s WinStar Farm following the Kentucky Jockey Club.

“Very easy half with a nice long gallop out,” said Cohen, Oaklawn’s leading rider in 2019. “Happy to get back on him. He seemed to have matured since his last race. The time at WinStar did him a ton of good.”

Trainer Robertino Diodoro said Keepmeinmind, a late-running son of Laoban, is a candidate for the $750,000 Southwest Stakes (G3) Feb. 15 at Oaklawn. The 1 1/16-mile Southwest is Oaklawn’s second of four Kentucky Derby points races.

Keepmeinmind raced four times (all routes) last year, finishing second in the $400,000 Breeders’ Futurity (G1) on Oct. 3 at Keeneland and third in the $2 million Breeders’ Cup Juvenile on Nov. 6 at Keeneland before breaking his maiden as the 2-1 favorite in the Kentucky Jockey Club. His last three starts have been at 1 1/16 miles.

Diodoro was Oaklawn’s leading trainer in 2020.