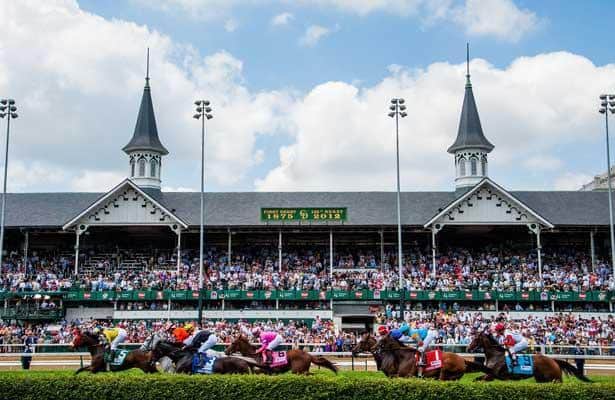 An overflow field of 15 horses, led by defending champ Keep Up and starting high weight Daddy Nose Best, has been entered for Saturday’s 36th running of the $100,000-added River City Handicap (Grade III) at Churchill Downs.

A year ago, the veteran rallied from far back in his stakes debut and finished in hand while running down multiple graded stakes winner Boisterous and clocking 1 1/8 miles over “firm” turf in 1:48.05. It was the second-fastest River City final time in 24 runnings at distance, only behind Dr. Kashnikow’s 2001 record of 1:47.90.

Keep Up was a 30-1 longshot last year, but figures to be a top contender Saturday fresh off a late-running allowance win at 1 1/8 miles over the Keeneland turf.

Patiently-handled by 64-year-old trainer Alex Clarkson, who has assisted in the preparation of training horses for decades, Keep Up’s other victory in six races this year came in the $66,400 Swoon’s Son on the Arlington Park grass.

“He’s doing great,” Clarkson said. “He’s a cold-weather horse, basically. He’s in great shape. Last time he ran I loved the way he was ready and on ball. We’ll have a month since his last race and … he has never been better, so I’m delighted for him.”

The racing career for Keep Up consists of just 17 races spanning four racing seasons. The regally-bred son of Unbridled’s Song out of 1998 Kentucky Oaks winner Keeper Hill was plagued early on by leg issues that limited his racing.

“When I got him he had the stem cell in his right-hind tendon and it took 120 days of jogging to bring him back to normal,” Clarkson said. “He just went on with it from there. He’s a big horse – he’s about 17-one (hands). He’s massive, but he’s kind. He needs to get a clear run.”

Keep Up will break from post position 4 under new rider Corey Lanerie and 117 pounds. His regular pilot, Miguel Mena, will be at Delta Downs in Vinton, La. on Saturday for riding engagements in four stakes races, including a mount aboard Mighty Brown in the $1 million Delta Downs Jackpot (GIII).

Bob and Cathy Zollars’ Daddy Nose Best, a back-to-back winner of Grade III Derbys at 3 – the El Camino Real Derby and Sunland Derby – has won three in a row, including a pair of grass stakes at Remington Park: the $75,450 Edward J. DeBartolo Memorial Handicap over 1 1/8 miles in late August and $100,000 Remington Green at 1 1/16 miles on Sept. 29.

As a result, the streaking Steve Asmussen-trained 4-year-old, who has banked $818,989 from seven wins in 21 starts, is the 118-pound starting high weight. The Kentucky-bred son of Scat Daddy will start from post 9 under Ricardo Santana Jr.

Other stakes winners in the field include Ken and Sarah Ramsey’s Coalport, a nose winner of the $123,917 Franklin-Simpson Mile at Kentucky Downs for trainer Wayne Catalano in mid-September and fifth in the $750,000 Shadwell Turf Mile (GI) on Oct. 5; and Calumet Farm’s Skyring, the D. Wayne Lukas-trained winner of Pimlico’s $300,000 Dixie (GII) on Preakness Stakes Day and off-the-board in the $2,760,000 Breeders’ Cup Turf (GI) on Nov. 2 at Santa Anita. Skyring will attempt to avenge a third-place finish in last year’s River City.

The race also attracted Susan and Jim Hill’s Grand Arch, who invades from Canada after finishing a clear second, albeit 10 lengths back, in the $111,793 Labeeb at Woodbine behind River Seven, who’d return to win last week’s $115,400 Commonwealth Turf (GIII). Prior to the Labeeb, the Brian Lynch trainee was third in a pair of Canadian Grade II events on the grass; July’s $208,333 Nijinsky at 1 1/8 miles and August’s $205,069 Sky Classic over 1 ¼ miles.

Star Channel (Davis, 113) is on the also-eligible list and could draw into the field if any horse in the main body of the race is scratched.

If 14 horses start, it will be the largest River City Handicap field in the race that dates back to 1978 (it’s been on the turf since 1987). A record 13 horses participated in the 1998 renewal won by Wild Event.

Bill Mott, who trains Kalamos for Juddmonte Farms, will attempt to win the race for a record third time. He won the race in 1986 and ’87 with Taylor’s Special and Kings River II, respectively.