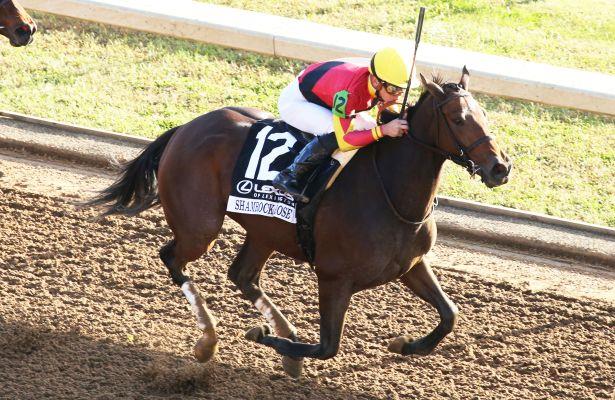 Conrad Farms’ Shamrock Rose, the champion filly and mare sprinter of 2018, tops a field of nine entered Wednesday for Saturday’s 18th running of the $300,000 Madison (G1) going 7 furlongs on the main track.

Coming off a third-place finish in the 1 1/16-mile Azeri (G2) at Oaklawn March 16, Shamrock Rose will be ridden by Irad Ortiz Jr. and break from post position nine.

Also figuring to draw support in the Madison are the 1-2 finishers from the Barbara Fritchie (G3) at Laurel on Feb. 16: Late Night Pow Wow and Spiced Perfection, who finished a head apart.

Trained by Javier Contreras, who will be saddling his first Keeneland starter, Late Night Pow Wow made her first nine starts at Charles Town and her past three at Laurel with those resulting in stakes triumphs. Luis Saez will be aboard for the first time Saturday and break from post position six.

Pantofel Stable, Wachtel Stable and Peter Deutsch’s Spiced Perfection closed out 2018 with a victory in the La Brea (G1) at Santa Anita. Trained by Peter Miller, she will be ridden by Javier Castellano and break from post position five.

WARRIOR’S CLUB AND LIMOUSINE LIBERAL GET REMATCH IN 14-HORSE COMMONWEALTH
Churchill Downs Racing Club’s Warrior’s Club and Katherine Ball's Limousine Liberal finished a neck apart in last year’s Commonwealth (G3) and the two will meet up again Saturday as part of a 14-horse field for the 33rd running of the $250,000 race going 7 furlongs on the main track.

The Commonwealth will go as the sixth race on Saturday’s 11-race program with a 4 p.m. ET post time. First post time Saturday is 1:05 p.m.

Trained by D. Wayne Lukas, who won the Commonwealth in 2002 with Orientate, Warrior’s Club finished second in his 2019 debut in a 6-furlong sprint at Oaklawn on March 3. Jon Court has the mount and will break from post position 13.

Limousine Liberal, who also was third in the Commonwealth in 2017, will be making his 2019 debut for trainer Ben Colebrook. A multiple graded-stakes winner and earner of nearly $1.8 million, Limousine Liberal will be ridden by Tyler Gaffalione and break from post position six.

Defending champion Bound for Nowhere, owned and trained by Wesley Ward, heads a field of 13 entered Wednesday for Saturday’s 23rd running of the $200,000 Shakertown (G2) for 3-year-olds and up going 5 ½ furlongs on the turf.

The Shakertown will go as the seventh race on Saturday’s 11-race program with a 4:35 p.m. ET post time. First post time Saturday is 1:05 p.m.

Perfect in two starts at the Shakertown distance at Keeneland, Bound for Nowehere also won the lucrative Tourist Mile at Kentucky Downs. Saturday’s race will mark his 2019 debut and he will be ridden by Luis Saez from post position nine.

Disco Partner will be making his 2019 debut Saturday and will break from post position three in the Shakertown under Irad Ortiz Jr.

Owned by Breeze Easy, LLC and trained by Joe Orseno, Imprimis has compiled an 8-6-0-0 mark on the grass and comes into the Shakertown off a 3 ¼-length victory in the Silks Run at Gulfstream Park on March 9. Paco Lopez has the mount and will break from post position 11.