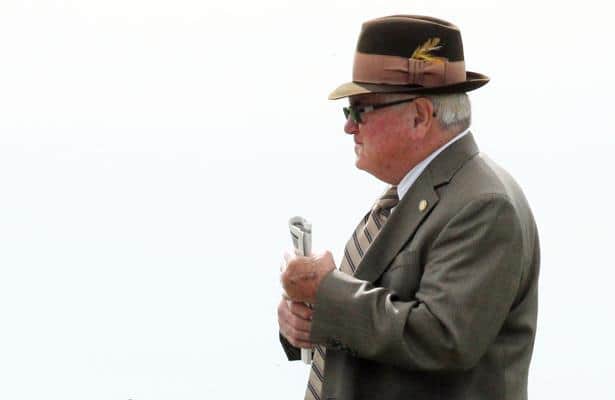 Lifelong horseman and longtime Keeneland Starter Robert Lee “Spec” Alexander, widely respected for his skill with Thoroughbred racehorses and a beloved ambassador of Keeneland, died Monday. He was 80.

“Spec was a Keeneland institution -- an unquestioned master of his craft,” Keeneland President and CEO Bill Thomason said. “For decades, his talent as a horseman ensured the safety of countless Thoroughbreds and their riders, from schooling young horses about the starting gate during morning training hours to providing a clean start during the afternoon’s races.

"Horsemen who train and race at Keeneland always have been confident that Spec and his team would handle each horse with exceptional care.”

One of Alexander’s most memorable mounts was 1961 champion 2-year-old colt Ridan, who Alexander broke at Claiborne and galloped throughout his juvenile season. Trained by LeRoy Jolly, Ridan won Keeneland’s 1962 Blue Grass and was third in the Kentucky Derby.

Alexander knew a talented Thoroughbred when he saw one.

When a bright chestnut 2-year-old colt arrived at the Keeneland starting gate one summer morning in 2017 for fundamental lessons, Alexander knew the youngster would become a superstar. The colt, sold for $500,000 at Keeneland’s 2016 September Yearling Sale, at the time was with Keeneland-based trainer Rodolphe Brisset. A year later with trainer Bob Baffert, he made headlines as undefeated Triple Crown winner Justify.

“The good ones just stand out from the others,” Alexander said in a 2018 interview, describing the intangible qualities of superior racehorses.

Like many young horses at Keeneland during the summer, Justify honed the starting gate skills required for racing under Alexander. Most Thoroughbreds master the technique of entering, standing and sprinting out of the starting gate in just a few classes while others need remedial education. With his crew, Alexander was patient regardless of each animal’s ability. Thoroughbreds are known to have incredible memories, and Alexander said they will not forget a bad experience in the starting gate.

“Horses only know what we teach them,” Alexander said, noting that teaching horses good manners is easier than undoing their bad manners.

Alexander was mindful of the time and money people invested in racehorses and treated each animal as if it were his own. He also capitalized on his crew’s diverse horsemanship skills when an equine student needed extra attention.

“I’ve learned over the years that one person will get along with a horse and another person won’t,” he said. “I have really good horsemen on my crew and they work together.”

Despite his high-profile position during the races, Alexander was most comfortable early in the day when the starting gate is positioned at the 4½-furlong chute on the far side of the Grandstand. This is where seasoned runners perfect their skills, where impressionable youngsters progress in their classes and where Alexander was both mentor and pupil.

“My favorite part of working for Keeneland is developing young horses,” he said. “And every day I learn something new. I have been doing this a long time, but I don’t know everything.”