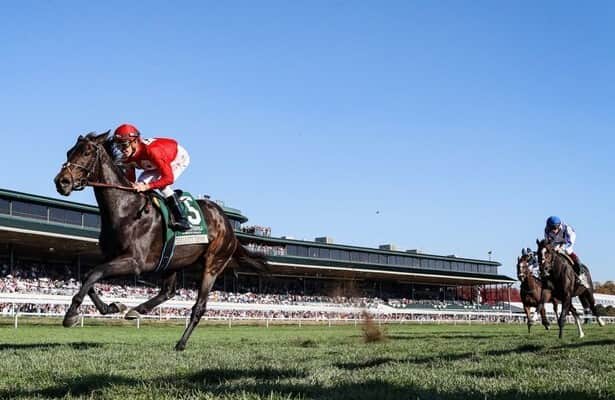 Temple City Terror uncorked a sweeping move on the far turn that propelled her to the front at the top of the stretch en route to a three-length victory in the Grade 3, $294,688 Dowager Stakes for fillies and mares Sunday afternoon at Keeneland.

The victory gave jockey Tyler Gaffalione a sweep of the three weekend stakes and his fifth stakes victory of the fall meet.

Owned by Pocket Aces Racing and Somewhere Stable Kentucky and trained by Brendan Walsh, Temple City Terror covered the 1 1/2 miles on a firm turf course in a stakes-record time of 2:27.98.

TEMPLE CITY TERROR surges to victory in the @roodandriddle Dowager (G3), marking a stakes record! @Tyler_Gaff sweeps all 3 stakes at Keeneland this weekend. Find her as hip 197 at #KeeNov! pic.twitter.com/TGoVCd12uO

“Unbelievable,” was Walsh’s description of Temple City Terror’s development. “If you had told me three years ago that she was going to do something like this, I’d have said you were crazy. Once she got her maiden – I think she took eight or nine starts to break her maiden – she gradually, gradually improved. She’s as honest as the day is long, and she leaves it all out there.”

Flying Fortress and Beside Herself jockeyed for the early lead through fractions of 22.66 and 48.14 seconds with Beside Herself taking over with a little less than seven furlongs to go. Temple City Terror raced next to last in the run down the backstretch and did not begin to move until Beside Herself had clocked a mile in 1:39.14.

On the turn Gaffalione steered Temple City Terror to the outside and in the clear to quickly pass half the field. She hit the top of the stretch with a full head of steam four wide and never was challenged in the run to the finish.

“I was able to look at the screen going by the stands for the first time, and I saw 22 and change,” Gaffalione said. “I was comfortable with where I was. My (mare) was doing everything very easily. They kept coming back to me, and I didn’t want to take anything away from her. She was in good stride, so I just let her be.”

A Keeneland sales graduate, Temple City Terror notched her first graded-stakes victory and picked up $174,375 with the triumph that swelled her career earnings to $696,218 with a record of 28: 6-5-5. She is a 6-year-old Kentucky-bred daughter of Temple City out of the More Than Ready mare It Takes Two.

It was another three lengths back to Coastana with Flying Fortress, Mia Martina, Core Values, favored Beside Herself, Stand Tall and Go Big Blue Nation following in order.