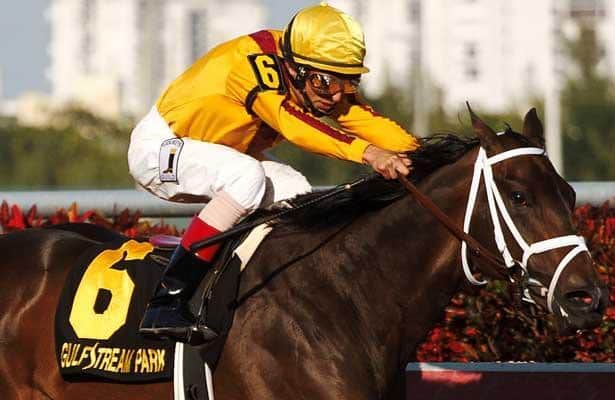 Kauai Katie is even money to keep her perfect record in 2013 intact Monday when she faces five other 3-year-old fillies in the 83rd running of the Grade 1, $300,000 Acorn at Belmont Park.

The one-mile Acorn will be run as race 9 on the 11-race Memorial Day card, one of a trio of graded stakes supporting the 121st running of the Grade 1, $750,000 Metropolitan Handicap.

A winner of six of her seven starts by a combined margin of 39 lengths, Kauai Katie opened her sophomore campaign with an eight-length score going six furlongs in the Grade 3 Old Hat on New Year’s Day, and later that month added a front-running, 5 ½-length triumph in the Grade 2 Forward Gal at seven furlongs, both at Gulfstream Park. She returned from a three-month freshening with an easy win in the seven-furlong Road Princess overnight stakes at Aqueduct Racetrack.

“We didn’t want to go from a long break from the Forward Gal to the Acorn, so that’s why we ran her in the overnight stakes,” said Todd Pletcher, who trains the Malibu Moon filly for Stonestreet Stables. “We’re hoping she got enough out of it to set her up for this.”

The Acorn will be Kauai Katie’s second start beyond seven furlongs, having suffered her only career loss when she was fourth in the 1 1/16-mile Breeders’ Cup Juvenile Fillies.

“I don’t think, for whatever reason, she handled the Santa Anita surface at all,” said Pletcher. “She’s been very consistent other than that. We know she’s a top-class sprinter, and we’re hoping we can stretch her out to a mile.”

Hall of Fame jockey John Velazquez, who was aboard for both Kauai Katie’s victories in Florida, will ride from post position 1.

Expected to attract considerable support is the Bob Baffert-trained Midnight Lucky, who set the pace in the Kentucky Oaks before fading to finish fifth. The gray daughter of Midnight Lute was a 7 ¼-length winner first time out on February 16 at Santa Anita Park, in which she earned a Beyer Speed Figure of 100, and next romped by eight lengths in the Sunland Park Oaks.

Baffert, who won last year’s Acorn with Contested, has named Rosie Napravnik to ride the Mike Pegram color-bearer, the 7-5 second choice on the morning line from post position 5.

Drawing the outside post position Grade 2 Gazelle winner Close Hatches, most recently seventh behind winner Princess of Sylmar in the Grade 1 Kentucky Oaks. Trained by Hall of Famer Bill Mott, the First Defence filly rallied from ninth to win her first start on January 26 at Gulfstream Park, and next was a front-running winner of an optional claimer going 1 1/16 miles.

“She didn’t seem to run her race in the Kentucky Oaks,” said Mott of Close Hatches, a Juddmonte Farms’ homebred. “She had trained well coming into the race, and she seems to be doing well again back in New York. The distance shouldn’t be a problem as she’s a filly who has some speed.”

Joel Rosario will ride Close Hatches, 6-1 on the morning line.

Trainer Jim Bond will be represented by Spendthrift Farm’s Cue the Moon, third in the Grade 2 Gulfstream Park Oaks to Dreaming of Julia in her 2013 debut, and William Clifton, Jr.’s Momentary Magic, who broke her maiden on March 17 at Gulfstream in her third start.

“Both fillies are doing fantastic,” Bond reported from Saratoga Race Course. “In her first race back, Cue the Moon ran into Dreaming of Julia – who ran a tremendous race – and I think Cue the Moon needed the race. Momentary Magic has been Cue the Moon’s workmate, and Cue the Moon can’t get past her. I’ve always believed she was a superstar. Her last race was pretty strong.”

Rounding out the field is Elizabeth Valando’s Let Me Entertain U, fifth behind Close Hatches in the Gazelle last time out.