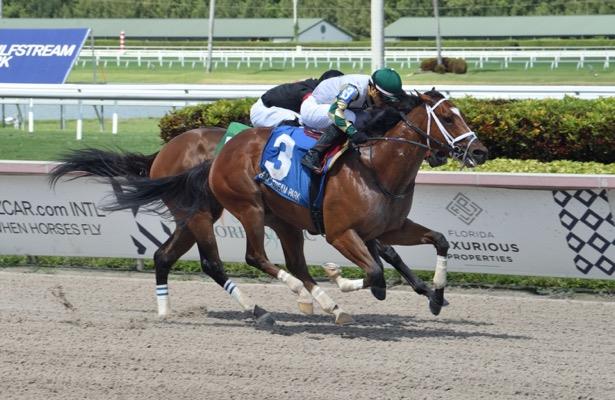 Reeves Thoroughbred Racing’s Double Crown and Ournationonparade will join forces for Saturday’s $75,000 Carry Back at Gulfstream Park, giving trainer Kathy Ritvo a potent 1-2 punch in the seven-furlong sprint for 3-year-olds.

The Carry Back highlights the July 4th program, along with the $75,000 Azalea, a seven-furlong sprint for 3-year-old fillies.

Double Crown is coming off a gutsy half-length victory over graded-stakes winner and Grade 1 stakes-placed Green Light Go in the May 16 Roar Stakes at Gulfstream, in which he rallied from mid-pack to get an edge over the 2019 Champagne (G1) runner-up to Tiz the Law in mid-stretch that he would maintain to the wire.

“He’s so professional. What you see in his races is what you get,” Ritvo said. “He’s just a nice classy horse.”

The gelded son of Bourbon Courage won at first asking for trainer Lacey Gaudet in a Sept. 8 maiden special weight race at Laurel Park, finishing a head in front of pacesetter Ournationonparade, who was debuting for trainer Bernie Haughton. Impressed by both efforts, Dean and Patti Reeves went ahead and privately purchased both promising Maryland-bred 2-year-olds.

Double Crown was given time off after his debut victory and returned to action for Ritvo at Gulfstream with a second-place finish in an April 26 allowance, in which he ran into traffic before falling a half-length short of victory with a strong late rally. Double Crown, who came back to win the Roar, hasn’t raced beyond 6 1/2 furlongs in three starts.

“I think he’ll go long. He’s a nice enough horse that we decided to do everything right by him and give him the best opportunity to have a great career,” Ritvo said. “We’re trying to give him time to develop into a good horse.

Cristian Torres has the return mount.

The Carry Back will mark the fourth meeting between Double Crown and Ournationonparade, who made a wide bid on the far turn in the Roar before running evenly in the stretch to finish fourth, beaten 5 3/4 lengths by his stablemate.

Ournationonparade lost his rider after clipping heels in his previous race, in which Double Crown finished second April 26.

“He hasn’t had the best of luck,” Ritvo said. “He’s going into this race really well. I’m really happy with him too.”

After being purchased by the Reeves out of his debut, Ournationonparade returned immediate dividends, breaking his maiden in the $100,000 Maryland Million Nursery Oct. 19 for Haughton. Ournationonparade went on to finish third in the Feb. 29 Hutcheson, in which he was beaten a half-length in his first start for Ritvo.

Luca Panici is scheduled to ride Ournationonparade for the first time Saturday.

Eric Worth’s With Verve looms as a strong opponent for the Ritvo-trained duo while cutting back to seven furlongs Saturday after finishing fifth behind graded-stakes winner Sole Volante in a mile allowance at Gulfstream June 10. The Larry Bates-trained son of Kantharos previously finished third in the Road, 1 1/2 lengths behind Double Crown, and won the Hutcheson, in which he finished two necks ahead of Ournationonparade.

Hall of Famer Edgar Prado has the return mount.

Newtown Anner Stud and KimDon Racing LLC’s Prince James is slated to make his 2020 debut in the Carry Back after finishing fifth in the Remsen (G2) at Aqueduct in his juvenile finale. The Kelsey Danner-trained son of Tiznow previously won his debut at Monmouth and finished second in an allowance race at Churchill Downs.

Edgard Zayas has the call on Prince James, who has run around two turns in all three of his career starts.

Shadybrook Farm Inc.’s Cajun Brother will be seeking to rebound from his first career loss while cutting back from a mile to seven furlongs. The Michael Yates-trained son of Cajun Breeze set a hotly contested pace before fading to sixth in a May 16 allowance. Previously, Cajun Brother scored back-to-back wins in a maiden special weight race and an optional claiming allowance, both at six furlongs.