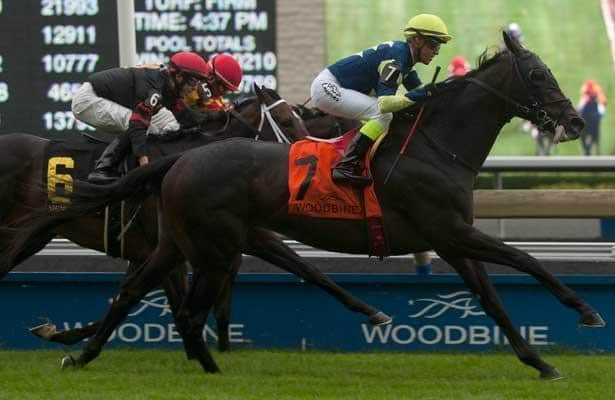 Karibu Gardens made his first stakes appearance a winning one in Saturday's co-featured $203,200 Grade 2 Sky Classic Stakes, at Woodbine.

Trained by Josie Carroll for owner Melnyk Racing Stables, Karibu Gardens made a menacing move in the final turn of the 1 1/4-miles turf tilt, finishing with a flourish under Luis Contreras to win by three-quarters of a length.

Reporting Star led a moderate tempo along the hedge in the Sky Classic through splits of :26.24, :50.72 and 1:15.20 with Money Talker on his flank and two-time Sky Classic champ Forte Dei Marmi saving ground in third.

Karibu Gardens, urged into contention from fourth position, rallied three-wide into the turn to put away the pacesetter and earn the score. Reporting Star stayed on gamely to win a place photo over Money Talker.  Karibu Gardens covered 1 1/4-miles in 2:02.46.

"I had a perfect trip on the outside watching everybody and keeping my horse in the race," said Contreras. "When I asked him to go, he gave me a good kick."

Two starts prior, on July 1, Karibu Gardens was pulled up and vanned off.  However, the dark bay made a smart return last time out, on July 20, to win a 1 1/8-miles allowance route by 2 1/2-lengths.

"We think he just took a bad step and Luis, very smartly, felt something not right and pulled him up," explained Carroll. "He came back to the barn in great shape. There was nothing wrong. He breezed well, so we were confident to run him back (on July 20.)"

Carroll believes that the lightly-raced Karibu Gardens has every right to improve.

"We thought all along there was some potential there," said Carroll. "He's a bit of a character. He doesn't always have his mind on business. Let's hope when he really focuses that we have something nice."

Karibu Gardens, bred in Kentucky by owner Eugene Melnyk, banked $120,000 in victory while improving his career record to 4-0-1 from eight starts.

Tucci Stables' Imperial Dream won a speed duel with Seffeara before sprinting to a comfortable victory in the $150,000 Vandal Stakes for Ontario-bred juveniles, Saturday at Woodbine

Trained by Nick Gonzalez, the dark bay son of Stormy Atlantic arrived at the six furlong 'Poly' sprint from a 4 3/4-length maiden win on July 13.

Seffeara, a track record setter on debut, arrived at the Vandal from a determined score in the 5 1/2-furlong Clarendon Stakes and was made the 4-5 mutuel favourite in the compact five-horse Vandal field.

Imperial Dream was quick from the gate for Patrick Husbands and took the race to Seffeara dueling through splits of :22.05 and :44.33. Imperial Dream widened through the turn and kicked away from the field down the lane en route to a 1 3/4-length score.

Imperial Dream covered six furlongs in 1:09.58.  Seffeara stayed on for place over a rallying Sky Racer.

Gonzalez deferred to his rider to come up with a winning race strategy.

"He always showed tremendous speed in the early stages of his training. We were wanting to rate him because we knew the speed was naturally there. I told Patrick he's a simple horse to ride, do whatever you want with him. Patrick has the experience and the know how," said Gonzalez.

Bred in Ontario by Stan Dodson, Imperial Dream is out of the talented 2008 Bison Stakes winner Nicki Knew. Gonzalez noted that Imperial Dream could make his next start in the grassy Grade 2 Summer Stakes held at Woodbine on Saturday September 13.