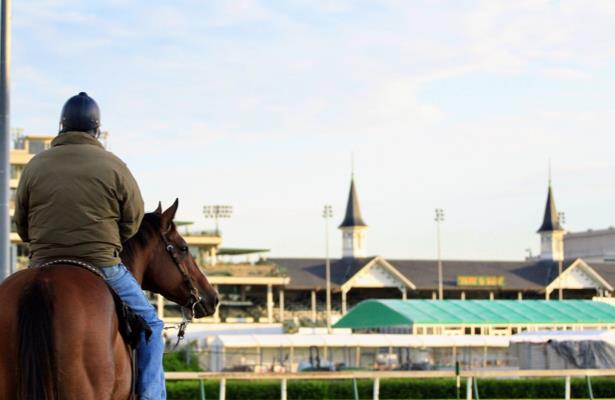 Amid the COVID-19 pandemic, the Kentucky Horse Racing Commission's race dates advisory committee met via teleconference on Thursday to discuss the current state of affairs at all Kentucky racetracks, as well as discuss the fluidity of future race dates.

During the meeting, Churchill Downs racetrack President Kevin Flanery said the track would consider conducting its spring meet, which has a scheduled opening of April 25, without spectators.

Flanery noted that the Louisville, Ky., track had delayed its “move-in” date to April 14, but added it was “a very fluid situation.”

Flanery said Churchill Downs adopted Kentucky’s “healthy at home” guidelines the day they were it was recommended by Gov. Andy Beshear, and that currently there are no horses or humans living on the property. He and his staff have daily meetings to keep abreast of the situation and to continually plan for the future of racing at Churchill Downs, whenever that may be.

“We have COVID-19 action plans in place so as when horses and humans are coming to the facility we bring them in in an orderly fashion, so they don’t show up on the property at one time," Flanery told the committee. "We will also be screening folks, asking them questions and making sure if they have symptoms we deal with those before they get on the property."

Given Churchill Downs Inc. owns Turfway Park, Flanery also gave a report on that facility. He said there are currently 800 horses on the grounds with 120 people taking care of them. No additional horses or caregivers will be permitted to reside at Turfway Park, which has begun steps to demolish the track's grandstand in place of a new one scheduled to open later this year.

Ken Mimmack, managing director of Ellis Park, said the Henderson, Ky., facility is closed, with no horses or humans living on the grounds. Ellis Park has 52 employees working minimal hours on site, and most work from home. They have a policy in place where any employee who feels ill is required to stay home.

Since the Ellis Park meet is normally scheduled for mid-summer, there typically are no horses on the grounds until mid-May. Mimmack said he expects that time frame to continue but that the track is prepared for anything. According to the existing schedule, Ellis Park would begin racing on June 28.

Mimmack also relayed that there were eight confirmed cases of COVID-19 in Henderson, but none affecting Ellis Park employees at this time.

Keenleand, which was slated to open on Thursday, cancelled its entire meet scheduled for this month. President and CEO Bill Thomason told the committee that 600 horses were currently on the grounds at Keeneland. He said 150 humans were on the property to care for the horses. Those workers undergo verbal checks and thermal temperature readings each day before being permitted into work areas.

Thomason said Keeneland is following federal best practices and that track officials are in constant contact with veterinarians regarding best practices for the horses. Keeneland also has instituted enhanced cleaning and disinfecting protocols.

Kentucky Downs, which runs a short boutique meet each fall, is closed, said Ted Nicholson, senior vice president and general manager. The Franklin, Ky., track and casino has only a “skeleton crew” of workers on the grounds and does not house any horses or grooms.

Nicholson stated there have been no instances of COVID-19 infection at the facility. He did mention that a test barn, scheduled to be built prior to the 2020 meet, may not be completed in time because of the pandemic.

As for the race dates, Keeneland’s meet was canceled, Churchill Downs' opening day is unknown, while Ellis Park is scheduled to begin racing on June 28.

But there was some confusion in the meeting. Churchill Downs previously had been awarded racing dates for Sept. 1-5 in order to conduct the Kentucky Derby and Kentucky Oaks race days.

The issue was not resolved in the meeting, which was not part of the KHRC normal meeting, and was tabled.