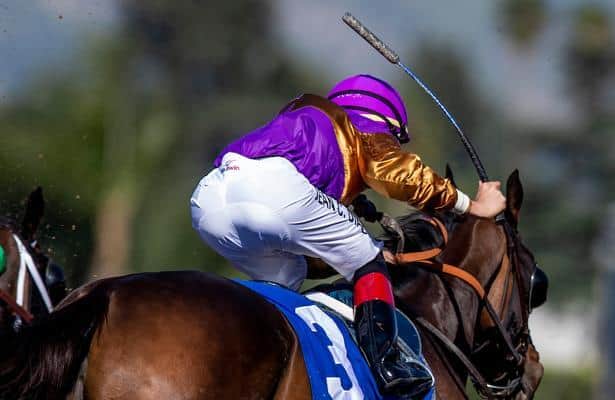 The Kentucky Horse Racing Commission’s rule committee approved a compromise agreement with the Jockeys' Guild for a new riding-crop rule in Kentucky.

The rule will limit jockeys to six overhand strikes during a race and more than two strikes in succession without giving the horse an opportunity to respond. Additionally, jockeys will not be allowed to raise the crop above their helmet. The rule will be voted on by the full commission on June 15 and go into effect at a later date.

“It’s important to remember that there was indeed compromise on behalf of both parties,” Terry Meyocks of the Guild said at the meeting. “The riders, the Guild and the Kentucky Racing Commission. We have been trying for the last several years to have a uniform riding crop rule in North America.”

Jockeys will be allowed to tap horse on the shoulder while both hands are on the reins, and use of the crop in an underhanded position is unlimited from the 3/8 pole to the finish.

The new rule gives stewards the ability to impose a $500 minimum fine or a three-day minimum suspension. For violations deemed “egregious or intentional,” both the fine and the suspension could be levied.

“We’re not going to let perfect get in the way of really good,” said Mike Ziegler, senior vice president and general manager of Churchill Downs and representative of the Thoroughbred Safety Coalition. “So we’re really good with this for that exact reason.”

?The rule passed through the rules committee by unanimous vote

Over the past several years, more restrictive crop rules have taken hold across the country, including California, and most recently New Jersey, which banned the crop altogether unless a safety issue.

Meyocks expressed hope at the meeting that the Kentucky rule could be adopted across North America, in order to give jockeys a uniform set of crop guidelines to follow.

“Having different rules in so many different various states is no good for anybody,” Mayocks said.