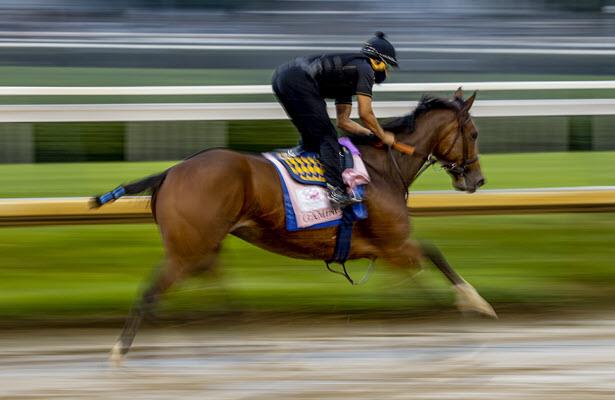 Joe Drape of The New York Times cited two unnamed sources in reporting the positive came from Gamine. The next step is for a split sample to be tested in order to confirm the positive result.

"Betamethasone is a legal, commonly used anti-inflammatory medication. It is not a 'banned substance,'" Craig Robertson wrote. "The medication was administered to Gamine on Aug. 17 by her veterinarian and on the veterinarian's recommendation."

That was 18 days before the Oaks. Robertson pointed out that the withdrawal period published by the Kentucky Horse Racing Commission is 14 days.

"If they are told by regulators that a medication will clear a horse's system in 14 days, they must be able to rely on that information," Robertson said.

The commission did not identify the horse with the positive sample during its announcement, noting, "The KHRC is following its regulatory process in conducting a follow-up investigation of this matter. Accordingly, the names involved will be released at the completion."

A KHRC spokeswoman said the follow-up results from the split sample should be available in November.

A positive drug test for Gamine would be the third for a Baffert runner in the past six months. On May 2 at Oaklawn Park, both Charlatan after winning the Arkansas Derby (G1) and Gamine winning an allowance race on the undercard tested positive for an overage of lidocaine. Baffert said it came from a back-relief patch that his assistant Jimmy Barnes handled before he fitted the horses with their tongue ties.

A 7-10 post-time favorite, Gamine finished third in the Oaks to 15-1 long shot Shedaresthedevil and 5-2 second choice Swiss Skydiver, who four weeks later won the Preakness. Baffert has since been training Gamine for the Breeders' Cup Filly & Mare Sprint.

The commission said samples from all other races on Kentucky Oaks and Kentucky Derby days showed no irregularities.

Robertson said the preliminary test results magnify a larger problem with medication limits being too low.

"Gamine's test revealed 27 picograms of betamethasone," he said. "The current threshold in Kentucky is 10 picograms. A picogram is a trillionth of a gram. Twenty seven picograms is a miniscule amount that would not affect a thousand-pound animal."

Class C medications including betamethasone are listed on the KHRC website. The commission said the tests were conducted by Industrial Laboratories of Wheat Ridge, Colo.