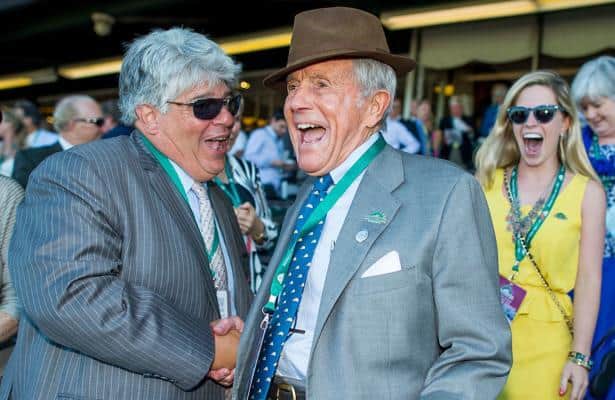 A 2-year-old colt by Palace Malice that sold for $550,000 at this week's Ocala Breeders' Sales Company auction will be named Cothran in honor of the late Dogwood Stable President and racing Hall of Famer Cothran “Cot” Campbell, according to an Aiken Standard report.

The colt, whose forehead bears a similar white star shape as the 2013 Belmont Stakes winner Palace Malice, was purchased by Eclipse Thoroughbred Partners, the modern edition of the Dogwood partnership.

Jack Sadler, the vice president of operations for both Eclipse and Dogwood, told the Aiken Standard that the horse “is a knockout," adding that owners had reserved the name Cothran while "looking for the right horse for it."

Todd Pletcher, who conditioned Palace Malice, a winner of seven races in 19 starts, will also train this son, the fourth foal out of Malibu Moon mare Moon Beamy. He was bought out of the Keeneland September yearling sale by Old South Farm for $110,000, where the colt breezed an eighth-mile in :10 during the under track show.

Dogwood Stable is credited for bringing more than 1,200 new owners into racing with at least 70 stakes winners campaigned in its green and yellow silks, also among them Summer Squall, the 1990 Preakness Stakes winner, and Storm Song, who won the 1996 Breeders' Cup Juvenile Fillies and earned an Eclipse Award.

Campbell died in October in Aiken at age 91.