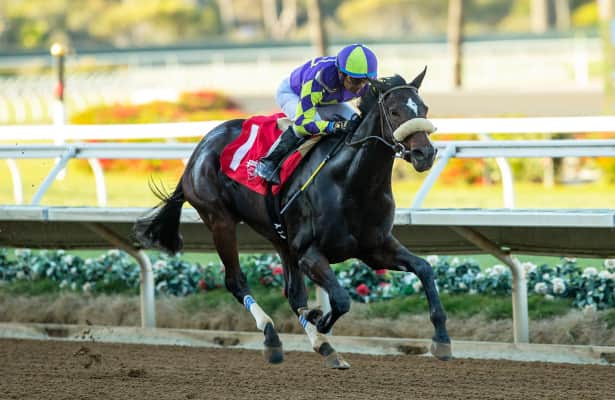 With a come-from-behind style that leaves her backers on the edge of their seats, Justique, idle since Nov. 19, leads a field of six sophomore fillies going a flat mile in Saturday’s Grade 3, $200,000 Las Virgenes Stakes at Santa Anita.

The Las Virgenes is the first leg in the 1/ST Coast to Coast Pick 5, a $1 wager with a 15 percent takeout on a series of five races between Santa Anita and Gulfstream Park.

Additionally, the Las Virgenes winner will receive 20 qualifying points to the Kentucky Oaks (G1) on May 5, with eight, six, four and two points going to the second- through fifth-place finishers.

A $725,000 Keeneland September yearling, Justique is by 2018 Triple Crown winner Justify and is out of the Bernardini mare Grazie Mille. Trained by John Shirreffs, Justique rallied from last to take her 5 1/2-furlong debut by 2 1/2 lengths July 31 at Del Mar and subsequently was third when stretched out to 1 1/16 miles in the Chandelier Stakes (G2) at Santa Anita on Oct. 8.

In her best race to date, Justique again rallied from last under Victor Espinoza to win the seven-furlong Desi Arnaz Stakes by 2 1/4 lengths at Del Mar on Nov. 19 and will be trying two turns for the second time in what will be her fourth start on Saturday.

Although Justique no doubt will command a good deal of attention on Saturday, Bob Baffert’s Faiza, idle since winning the Starlet (G1) going 1 1/16 miles at Los Alamitos Dec. 10, has plenty of natural speed and should be extremely tough to beat as she tries to remain unbeaten in her third start.

Purchased for $725,000 out of a 2-year-old in training sale in May of last year, Faiza is by Girvin out of the Smart Strike mare Sweet Pistol.

With Flavien Prat out of town Saturday to ride at Gulfstream Park, Ramon Vazquez will ride Faiza for the first time.

A winner of two of her first three starts, all on turf, Doug O’Neill’s Pride of the Nile, who despite stumbling at the break ran a huge race when second, beaten a head by Faiza in the Starlet, rates a huge chance with Juan Hernandez back aboard. Now that she’s established she can act on dirt as well as turf, Pride of the Nile, who earned a 77 Beyer Speed Figure in the Starlet, likely will stalk the early pace in what will be her fifth career start.

Pride of the Nile is by Pioneerof the Nile and out of the Hard Spun mare Inny Minnie.

Along with Faiza, O’Neill’s Broadway Girls also figures to ensure a fast pace. A gate-to-wire one-mile maiden turf winner two starts back on Nov. 13, she then took the one mile turf Blue Norther Stakes at Santa Anita on Dec. 30 in the same front-running fashion.

Well beaten in her only dirt try, a 5 1/2-furlong maiden race Aug. 21 at Del Mar, Broadway Girls will be making her fifth career start in the Las Virgenes.

Graded stakes-placed in her last two races, trainer Michael McCarthy’s Uncontrollable will be ridden for the first time by Kazushi Kimura, who will be seeking his third added-money win at the current meeting.

An even third, beaten 5 1/2 lengths by Faiza in the Starlet on Dec. 10, Uncontrollable was second, beaten just three quarters of a length at 24-1 in the Chandelier Stakes here on Oct. 8.

Uncontrollable is a California-bred filly by the Flatter stallion Upstart and is out of the Include mare Behavioral. A first-out winner going five furlongs versus statebreds on July 22, Uncontrollable, in her second start, was second going six furlongs in the California-bred Generous Portion Stakes Sept. 5.

With a win, two seconds and a third-place finish from four starts, Uncontrollable will hope to be rolling from off the pace.