Justify's half-brother, The Lieutenant, to stand at stud in New York 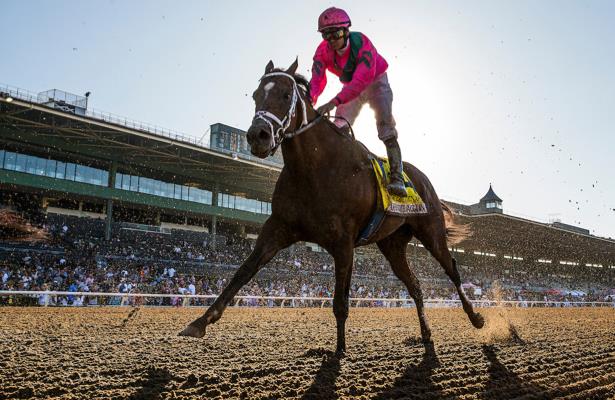 By Street Sense, The Lieutenant is out of the stakes placed Ghostzapper mare, Stage Magic.

The Lieutenant also placed second to Diversify in Belmont’s Suburban (G2) while outrunning Hoppertunity, Tapwrit and Discreet Lover, among others. He was second as well in Santa Anita's Californian Stakes (G2).

“Before Justify became a Triple Crown champion, I thought his older brother, The Lieutenant, could have been any kind," McCarthy said. "His looks, mechanics and desire to train reminded me of some of the most talented horses I had ever been around, before an unfortunate injury after the Suburban Handicap ultimately curtailed his career.

"I’ll miss watching him train in lock step with City of Light, and was sure he was geared up to make some noise in the fall schedule’s biggest races. I have no doubt that his looks, heart and strong female family will be a bonus to the New York Breeders for years to come. Get your mare on the books now… I know mine is."

“Justify is a very special horse. When the opportunity presented itself to stand his brother in New York, I just couldn’t pass it up," added Sequel's Becky Thomas. "Standing brothers of famous horses has served me very well. Giant’s Causeway’s brother, Freud, has become the very cornerstone of the breeding program in New York.

"Not only is The Lieutenant a half-brother to the future Horse of the Year, he beat a bunch of nice Grade 1-winning horses on his own. He is by a horse I love, Street Sense, who is having a phenomenal year, and I believe has a very bright future. I am very happy to be able to offer this quality of bloodlines to our breeders.”

The Lieutenant will stand for $6500 LFSN.