Tom's d'Etat has come a long way from humble beginnings 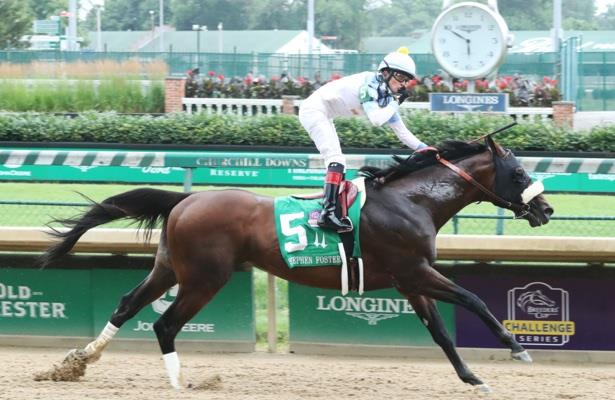 G M B Racing's Tom's d'Etat, the 6-5 morning-line favorite for Saturday's Grade 1, $750,000 Whitney at Saratoga Race Course, has come a long way from his humble beginnings as a laid-back yearling.

Long before the 7-year-old son of Smart Strike was a Grade 1-winning millionaire and among the leaders of the North American handicap division, he was selected by trainer Al Stall Jr. and Frank Wooten at the 2014 Keeneland September Yearling Sale, where he was purchased for $330,000 and was sent to Wooten's farm in Camden, S.C., for his first lessons under saddle.

Tom's d'Etat arrives at the Whitney off four straight triumphs, with scores in the Fayette (G2) on Oct. 26 at Keeneland, the Clark (G1) on Nov. 29 at Churchill Downs, the Oaklawn Mile on April 18, and the Stephen Foster (G2) on June 27 at Churchill Downs, and has accumulated $1,627,272 in lifetime earnings.

Much has changed the past six years with Tom's d'Etat, but Wooten said his demeanor is a notable exception.

"When we first got him here, he was so laid back," said Wooten. "I galloped him myself and I thought, 'Oh my God, we bought a plodding horse.' He was easy to gallop. He was a beautiful mover, but just kind of a lazy big horse. But he progressed from there."

Tom's d'Etat remained with Wooten following the 2014 sale until later that following spring.

When Wooten began breezing Tom's d'Etat at the Camden Training Center, he said, the horse took some major steps forward but still did not display an aggressive nature.

Tom's d'Etat's large stature and quiet manner earned him a unique nickname at the barn.

"We called him Bumble, like the abominable snowman [from the animated TV special Rudolph the Red-Nosed Reindeer]," Wooten said. "He was so big and just plodded along. … I kept thinking 'Once we light his fire, he'll get tougher' but he never really did. He was just the same. He was a beautiful mover across the ground, but just was not aggressive."

Lightly raced for a horse his age, Tom's d'Etat has a couple of gaps in his form. Following a maiden victory at third asking over the Saratoga main track in August 2016, he did not race again until the following March, where he defeated winners at Fair Grounds. In July 2017, he registered a 106 Beyer Speed Figure from a nine-length victory in a Saratoga allowance optional claiming event over stakes winners Far From Over and Bodhisattva. He did not return to action until November 2018, but did so in style with a 7 1/4-length romp over an off track at Churchill Downs.

Wooten is no stranger to developing subsequent top-level performers, having worked with Grade 1 winners Action This day, Upstart as well as Happy Ticket, the latter of whom Wooten said was similar in temperament.

"She was actually like the female Tom's d'Etat. She was taking everything in stride," Wooten said of the three-time Louisiana-bred graded stakes winner, who won the Ballerina (G1) at Saratoga in 2005.

Wooten and Stall's success has gone beyond Tom's D'Etat. On Wednesday afternoon, the conditioner saddled 3-year-old Zero to Sixty to a debut maiden victory at Saratoga. The Colombine Stable-owned American Pharoah filly was shown the ropes by Wooten.

"He took his time with her, too. She didn't run as 2-year-old. I just hope she continues to mature," Wooten said.

Wooten said he is hopeful that Tom's d'Etat can have an equally successful career as a sire when he takes up residence at WinStar Farm upon retirement.

"Al said that he's still a nice horse to be around and hopefully he'll pass that on," Wooten said.