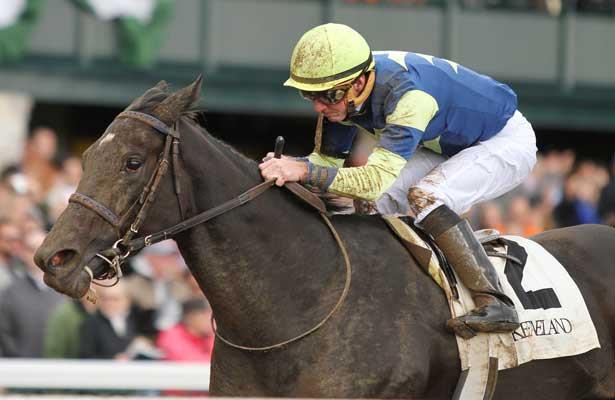 Speedway Stable’s Leigh Court came out of her sharp victory in Tuesday’s $60,000 Mardi Gras Stakes in good shape, according to leading trainer Mike Stidham. The 2013 champion 3-year-old filly of Canada made her 6-year-old bow a successful one with a front-running victory in the 5½-furlong turf sprint event, earning her eighth career victory and sixth in stakes company of her 16-race career. The win was her first since being purchased for $1 million at auction in Nov. 2014 and in four subsequent starts for the Stidham barn.

“She came out of it in good shape and looks good,” Stidham said. “Our goal is to have her fresh and healthy going into the spring and summer because once we get out of here and up to Keeneland there are races for her there. This summer, we’ll take her with our string to Arlington. She seems to prefer the synthetic and turf, so we’ll look at races on those surfaces. Woodbine and Arlington have a few races and as a long-range goal we’re looking at races like the (Grade I $700,000) Just a Game (Stakes) at Belmont (Park). It’s a one-turn mile on the grass and that - though a tough spot - might suit her as far as distance and surface.”

The daughter of Grand Slam has raced in Grade I company prior and did not disgrace herself. In Oct. 2013, the dark bay charge was fourth – beaten 1¼ lengths in the final jumps – in the Grade I $400,000 Queen Elizabeth II Challenge Cup going nine furlongs on the Keeneland turf. Though that trip was slightly out of her range, she has proven to be versatile, winning stakes from Tuesday’s turf dash trip to 1 1/16 miles on the synthetic Polytrack and six furlongs on the dirt.

“The number one goal is to get her over a million dollars in earnings,” Stidham continued. “John Adger, who was the manager for Stonerside and did an amazing job for them, got Peter Fluor and K. C. Weiner in the business and is very careful which horses he buys. His first two purchases for them were Leigh Court for a million (dollars) and Hard Not to Like for $1.5 million and (Hard Not to Like) earned $700,000, won a Grade I and then was sold for $2.4 million – so that was a home run. We were a little unlucky with Leigh Court running second last year in a couple tough races, but she needed her freshening and looked good coming back. These owners are going to be involved at the top level and are great for the sport, so it’s very exciting for us to be involved and we’re thankful for the opportunity.”

Grade II $200,000 Falls City Handicap winner last out winner Ahh Chocolate returned to the work tab for trainer Neil Howard after a brief freshening last week with a three-furlong move in 37.40 and returned again Wednesday afternoon to go a half-mile in 48.80. The Stoneway Farm homebred daughter of Candy Ride is aiming toward a spring campaign.

Grade I-winning distance specialist Majestic Harbor worked five furlongs in 1:02.20 for trainer Paul McGee ahead of a start in the Grade III $125,000 Mineshaft Handicap on Feb. 20.

Top-rated local sprinter Clearly Now worked an easy half-mile in 52.60 for trainer Ron Faucheux and owner Brittlyn Stable ahead of a planned start in the $60,000 Duncan F. Kenner Stakes on Feb. 20.

Brittlyn Stable’s stakes-winning sophomore filly Above Fashion, winner of the $50,000 Letellier Memorial two back for trainer Ron Faucheux, worked a half-mile in an easy 54.20 on Thursday.

Well-regard Dallas Stewart trainee Spikes Shirl worked a sharp half-mile in 48.60 on Wednesday for owner Charles Fipke. The sophomore son of Speightstown exits a tough-luck second to Tiznoble in allowance company on Dec. 28.