Just Might wires field in Thanksgiving Classic at Fair Grounds 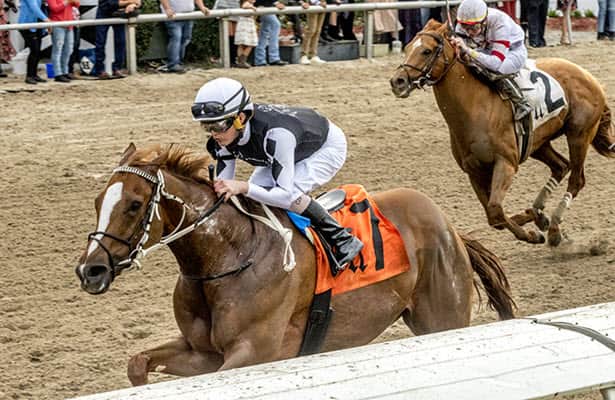 The outside draw gave jockey Colby Hernandez options, but seeing Just Might’s effort in the 97th running of the Thanksgiving Classic, it didn’t seem to matter. There was no asking needed—only the powerful strides of a seven-time stakes winner on display in the opening day feature at Fair Grounds Race Course.

Bred and owned by Griffon Farms and trainer Michelle Lovell, the chestnut gelding broke with alacrity and charged to the lead. Scoring a impressive victory, Just Might proved himself against a quality field of formful horses.

On the lead from the jump, Hernandez twice looked over his shoulder to see if he needed to get into his horse—twice he saw no one threatening. He was along for the ride.

“He broke in front of the field,” Hernandez said, “and there wasn’t much left for me to do.”

It was as if two different races were running. With the 2 1/2 length victory, Just Might ($8.20) won the right to have another go against stakes company on dirt. All six foes finished gamely within three lengths of each other for the place spot.

“I thought Colby did an excellent job getting him away from the gates and then he never moved on him.” Lovell said. “Colby just let him do his thing. He shook his reins at him late in the stretch and then wrapped back up. I thought it was a great ride by Colby and a great performance by my big horse. So exciting to watch him run.”

Greeley and Ben proved his mettle in the second flight. Passing Strike Power with a furlong to go, he then held off the hard charging closer Pyron at the wire. Due to a clocking malfunction, no time was available. That makes fourteen exactas out of fifteen races in 2021 for Broberg’s seemingly ageless 7-year-old.

Necker Island, the 1.70-1 favorite, rated off the pace and then steadied into the turn losing two lengths and momentum. Finishing fourth, the connections certainly are wondering what if he had gotten Just Might in his sights.

With the win, Just Might now sports a career mark of 31-9-7-6 with a bankroll of $783,914. A fun celebration in the winner’s circle as the family of breeder and owner Dr. Robert Griffon had come to be a part of this win and the patriarch’s birthday.

“Michelle and Colby did a great job, Griffon said after the race. “We told him today to let him have his race, and he ran a good one today.”