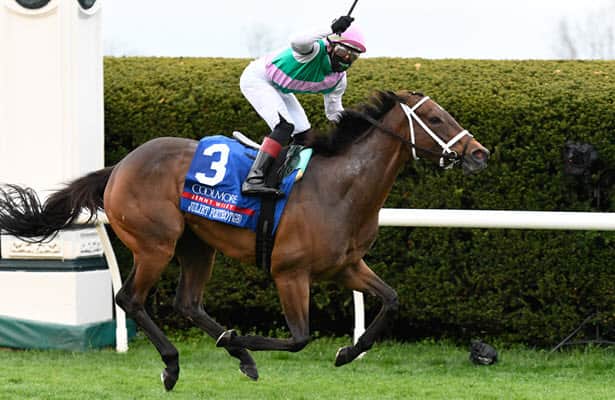 Juddmonte Farms’ homebred Juliet Foxtrot (GB) took the lead out of the gate and cruised to a 2-length victory over Tamahere (FR) to win the 33rd running of the $300,000 Jenny Wiley (G1) for fillies and mares on a soggy Saturday afternoon at Keeneland.

It is the fourth victory in the race for Juddmonte, whose previous triumphs came with Tates Creek in 2002 and Intercontinental (GB) in 2004 and 2005.

Trained by Brad Cox and ridden by Tyler Gaffalione, Juliet Foxtrot covered the 1 1/16 miles on a yielding turf course in 1:44.51. It is the first victory in the race for Cox and Gaffalione and was the third winner of the afternoon for Cox.

Gaffalione put Juliet Foxtrot right on the lead and led the field of six through fractions of :24.35, :49.45 and 1:13.72 with Tamahere tracking in second.

Juliet Foxtrot maintained a daylight margin into the stretch and never was threatened in the run down the lane.

“She really relished the ground," Gaffalione said. "They said that they worked her a couple weeks back over a turf course similar to this and they said she just ate it up. As soon as she broke, I could feel that I had a ton of horse and she was loving every bit of it. I just put my hands down when she broke and she came right back to me. It was an easy ride today.”

It was another three-quarters of a length back to Etoile (FR), who was followed in order by Maxim Rate and Micheline.