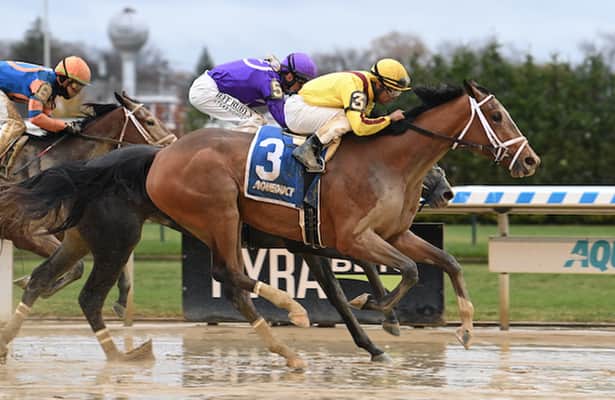 Put to a drive on the backstretch by jockey Luis Saez, odds-on favorite Julia Shining didn’t make it look easy but got the job done nonetheless in the Grade 2, $250,000 Demoiselle on Saturday at Aqueduct, narrowly defeating the maiden Affirmative Lady in the nine-furlong race for 2-year-old fillies.

The Demoiselle, run for the 101st time, is part of the Road to the Kentucky Oaks, awarding qualifying points of 10-4-3-2-1 to its top-five finishers.

In victory, Julia Shining, a full-sister to multiple Grade 1-winning Champion Malathaat, replicated her older sister's success in this event in 2020.

A runaway maiden winner at Keeneland’s Fall Meet, Julia Shining was making just her second career start in the Demoiselle for Hall of Fame trainer Todd Pletcher and Stonestreet Stables, who also bred the Curlin filly. Dealing with rainy conditions over a sloppy and sealed track, her inexperience was really put to the test after she broke near the back of the field of seven as Tribal Queen went out to lead through honest splits of 24.61 seconds for the opening quarter-mile and 49.35 for the half.

Not satisfied with his position exiting the first turn, Saez began imploring Julia Shining for run on the backstretch and continued to work on her while the pair went wide around the far turn through three-quarters in 1:14.31. It wasn’t until the field turned for home that the two were able to level off and make up appreciable ground, but by then Affirmative Lady had surged to the front and was loath to relinquish the lead. These two battled head and head in the final furlong, however, Julia Shining, despite making a wide rally that lasted the better part of the race, would not be denied and hit the wire a neck in front of her stubborn rival, completing the distance in 1:53.05.

“She was clearly not handling things [down the backstretch] and Luis was trying to encourage her to improve position and finally did it around the quarter pole,” said Pletcher. “Once she found a rhythm down the lane, she started to close and Luis said she kind of got her head in front and then wanted to wait a little bit.

“Clearly she has tons of natural talent and is still putting it all together,” the trainer added. “We knew from her debut that she didn’t like the kickback, and you add the sloppy track into that today, so that was our biggest concern was trying to get her into the clear. Unfortunately, the only way to get her into the clear was to go pretty wide, but she’s got so much natural stamina that we felt the mile and an eighth was really going to play to her strengths.”

Trained by Graham Motion for AMO Racing USA, Affirmative Lady fought doggedly under Hall of Famer John Velazquez but remained a maiden when the dust settled. Her runner-up finish in the Demoiselle actually represents her best placing to date, with the gray Arrogate filly having previously gotten a third and a fourth to begin her career at Keeneland.

“The dirt was hitting her and I saved ground the best I could,” said Velazquez. “I put her in the clear and I heard the winner all the way from the half-mile pole right outside of me. I knew it was one of Todd's, either or. I’m thinking that I’ll just hold my position where I was and hopefully when they come to me, she goes. She put up a good fight though. I’m very proud of her.”

The Pletcher-trained Gambling Girl finished third, three-quarters of a length behind Affirmative Lady, while Royal Spa and La Vita Sofia rounded out the top five. Foggy Night and Tribal Queen completed the order of finish.