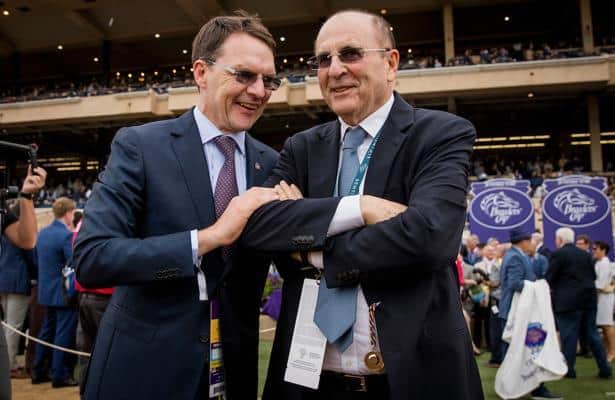 Royal Dornoch, a bay son of Gleneagles (IRE) out of Bridal Dance (IRE) by Danehill Dancer (IRE), completed the one mile in a juvenile course-record time of 1:35.13.
Running prominently in the center of the course against six rivals, Royal Dornoch chased the pacesetting Kentucky-bred Kameko, ridden by Oisin Murphy, inside the final furlong and steadily wore down his opponent to get up in time at the finish. Two O’Brien-trained runners, 9-1 Iberia (IRE) and 6-1 Year of the Tiger (IRE), finished third and fourth respectively. Sound of Cannons (GB), Highland Chief (IRE) and Pyledriver (GB), completed the order of finish.
"He has ability, he was third in a Group 2 over six furlongs (Qatar Richmond Stakes at Goodwood, Aug.1) so he has the pace, but we always felt he wanted the mile,” said Lordan to ITV Racing afterward. “He’s a very straightforward colt, he had to dig deep and he did."
Today’s win was the second in seven starts for Royal Dornoch, but his first at the mile distance. He broke his maiden at Gowran Park in Ireland two races back at seven furlongs, but trailed a five-horse field in his last start, the seven-furlong Pommery Champagne Stakes (G2) at Doncaster on Sept. 14.