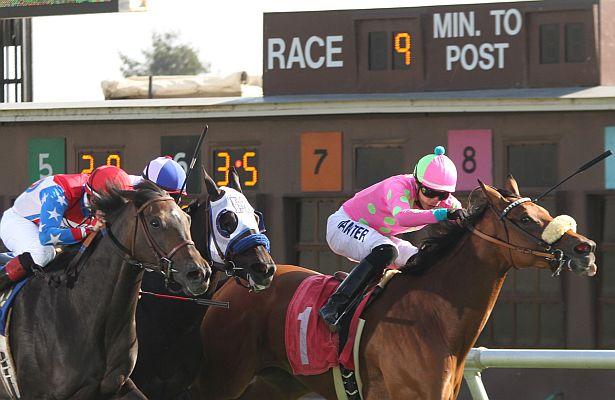 Hernandez, 28, will be joining forces with longtime agent Craig O’Bryan, who has been idle since Tyler Baze opted for the Oaklawn/Kentucky circuit over a year ago.

“I got a call, asking if I’d be interested in representing Juan,” said O’Bryan. “I said, ‘When can he get down here?’ The phone is already ringing and I truly believe our business will continue to grow as people see, first-hand, just how good he is.”

How good is Juan Hernandez?

With 135 wins from 429 mounts, he led his nearest competitor by some 77 wins at the conclusion of Golden Gate Fields’ 72-day Winter/Spring Meeting this past Sunday, winning at a 31 percent clip. Many racing insiders have been wondering when he was going to make the move to So Cal for some time now, particularly in view of the tremendous success former No Cal rider Abel Cedillo has enjoyed over the past year riding full-time at Santa Anita, Del Mar and Los Alamitos.

“I’m really excited to come and ride with that colony down there,” said Hernandez by phone from Northern California on Thursday. “My wife’s family lives in Ontario, near Santa Anita, so our kids will be spending the summer with them. Craig came very highly recommended. I think it’s a big plus to go with him because he’s had many top riders and he knows everyone down there, he knows the business.”

A 28-year-old native of Veracruz, Mexico, Hernandez and his wife, Melissa, have two boys aged 5 and 2. He had 1,882 wins from 8,726 career mounts through Sunday and with just Irad Ortiz Jr. and Luis Saez in front of him, he is currently America’s third winningest jockey in 2020, with more than 125 wins through this past weekend.

O’Bryan, who enjoyed an eight-year run with Baze, is a second-generation agent, following in the footsteps of his legendary father George “Black Heart” O’Bryan.

With a past client list that reads like a Who’s Who of Turfdom, Craig O’Bryan has represented Hall of Famers Eddie Delahoussaye (for an incredible eight-year run that included back to back Kentucky Derby victories with Gato del Sol in 1982 and Sunny’s Halo in 1983), Alex Solis and Gary Stevens (2013 Breeders’ Cup Classic with Mucho Macho Man and 2013 Distaff with Beholder), as well as David Flores, Corey Nakatani, Jose Valdivia, Jr., Aaron Gryder and Baze.

“I’ve been doing this for 48 years, since 1972,” said O’Bryan. “The main thing now, is that people need to know that Juan is coming here permanently, this isn’t just for the summer. For me personally, it’s a great opportunity and it’s great to be back in action."