By Brittney Mayotte/Woodbine Entertainment August 2, 2020 3:50am 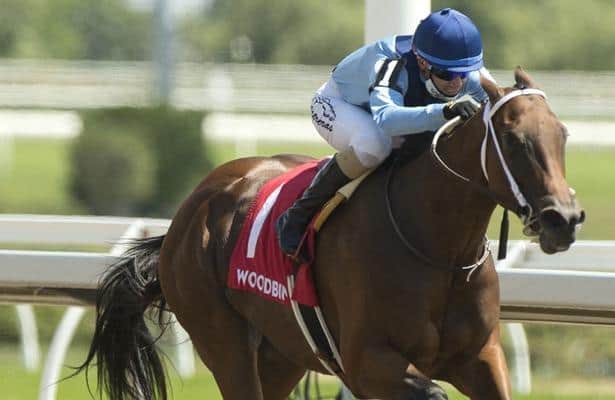 Team Hanley’s undefeated two-year-old filly Joy’s Rocket was impressive in her stakes debut at Woodbine Racetrack on Saturday, taking off in the $100,000 My Dear Stakes to win by 2 3/4 lengths under Luis Contreras.

Joy’s Rocket launched to the lead in the 5 1/2-furlong Tapeta test and clocked fractions of :21.94 and :45.44 while prompted by Rocket Reload. The Steve Asmussen trainee shook off her main rival in the stretch and won her first stakes outing by nearly three lengths in 1:05.10.

Favored Road to Romance pressed three-wide early but settled into stalking position behind the front-runners and then made a bid moving into the stretch to get up for second place, with Rotary rallying to her outside for third.

Emmeline rounded out the superfecta with Rocket Reload, supplement Queen Rhonda and Silent Mamba completing the run down.

Joy’s Rocket was the 8-5 second choice after winning at first asking over Churchill Downs’s dirt track in sloppy conditions June 28. Saturday, she returned $5.50 to win.

“She was very professional pretty much the whole way,” Contreras said after taking his second My Dear title (his first was with Dream It Is in 2017). “From the beginning of the race to the end, she was so professional, and I was very confident with her.

“I saw the race at Churchill when she won. It was a muddy track and she just went to the lead. I wasn’t too worried because horses with this kind of talent, I think it’s easy to adjust to whichever track they go.”

Bred in Florida by Weston Thoroughbreds Training & Sales, the Anthony’s Cross-Queenie’s Pride filly is now two-for-two to start her career.

A late decision to enter Forester’s Turn in Saturday’s $150,000 Greenwood Stakes at Woodbine proved to be profitable for Hall of Fame trainer Robert Tiller and owner Rolph Davis.

Supplemented to the six-furlong turf event for Ontario-bred three-year-olds after training well following a recent victory at Woodbine, Forester’s Turn put forth a courageous effort to win the afternoon’s co-feature.

Forester’s Turn and Celebratory waged war on the front end, racing noses apart through a :22.61 first quarter and half-mile in :44.83. They continued to duel into the stretch with the stalkers, Forester’s Fortune, 3-5 favorite Artemus Citylimits and Barilko, fanning out wide.

Digging in down the lane, Forester’s Turn pulled ahead of Celebratory mid-stretch and then held off Forester’s Fortune in the final furlong to prevail by a half-length in 1:07.91.

Artemus Citylimits edged by Celebratory 2 1/2 lengths behind for the show dough while Last American Exit and Barilko completed the order of finish.

Sent postward as the 7-2 second choice, Forester’s Turn paid $9.90 to win and combined with Forester’s Fortune for an Old Forester exacta worth $48.50.

“He’s very game, this horse, and that young fella that rode him, he’s very game too,” said Tiller of rising star Kazushi Kimura, who reigned home his second stakes winner of the meet. “And he’s young. It’s a great thing to be young. I wish I was young again, but I’m not.

“This is a nice horse,” added Tiller, who co-owned dam Eff Bee Eye with longtime partner Davis when the mare won the 2014 Nandi Stakes. “At the end of the day, he’s got heart. All is well, everything went well.”

The homebred gelding has now won five of his seven career starts and more than $200,000 in earnings.

Live Thoroughbred racing continues on Sunday afternoon with the $100,000 Victoria Stakes headlining an 11-race program that gets underway at 1 p.m.

Baffert is voted off Thoroughbred Owners of Calif. board
With his role as a director brought into question...

'We couldn't be happier': Maxfield set for Stephen Foster
With only one loss in seven career starts, Maxfiel...